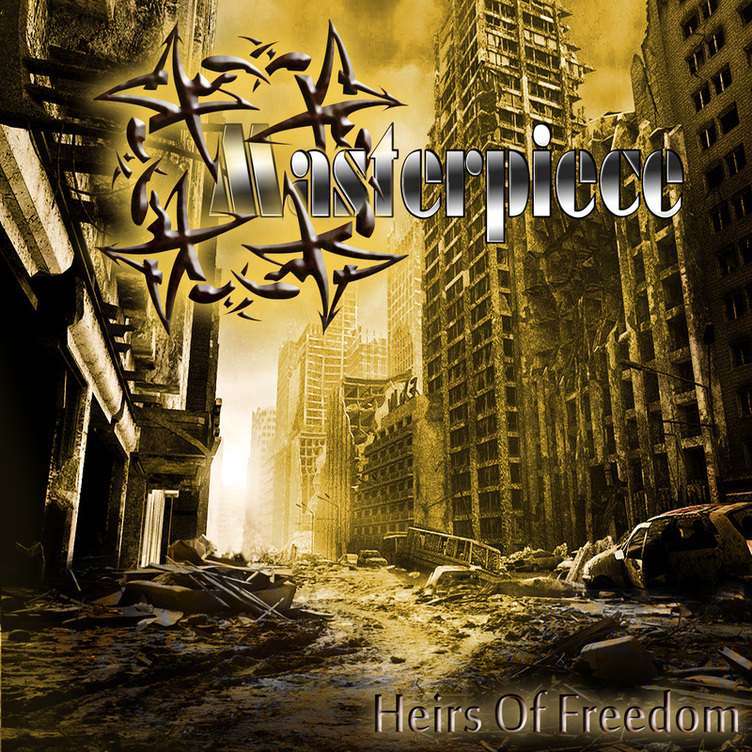 After having self-released demos in 2006 and 2008, Brazil's Masterpiece would come to the fore with their full-length album entitled "Heirs Of Freedom".
One is introduced to the work with a brief, classical-sounding composition, intended to evoke a sense of the regal and masterful.
The album begins in earnest with "Revenge", albeit simply. Guitarist and vocalist Denisson Silva would seem to want to invoke the voice of James Hetfield, which is really very unfortunate considering that his vocals, though at times strained and a little confusing due to errors in the English language, possessa unique and roughly passionate charisma. Thiago Chiarelli, drummer, holds down simple, heavy rhythms in tandem with bassist Pedro Bianchi's full-bodied bass grooves, while the guitarists Regisson & D. Silva seem content to riff rather plainly, chugging at times in a style reminiscent of nu-metal while giving fair expositions of both technique and heart through their soloing.

One of the highlights of "Heirs Of Freedom" is a song entitled "Mr. Disgrace", which begins with a sample work of television channels being flipped through, leading to a little man's monologue on the inefficiency of politicians. The hooks here are very catching and it is arguably the most memorable song on an album that, while undoubtedly composed by well-meaning players, is quite often seemingly filled with imitation and routine. Singer Denisson would do very well to abandon any pretense or impression in his vocals in future, however, and the creativity of the group best shines in the unison guitar soloing found throughout the album.
If the songwriting was to have been so made as to allow the drummer the full use of his repertoire and sense of dynamics, this record would be something else quite apart from the average. It is all the more unfortunate that what is instead delivered is an album that posits very little risk and, while endearing after repeated  listens, leaves one with the impression that some musical soul-searching would be in order for the musicians of Masterpiece.
Metal Master Kingdom's Album/Song review & Photo Request submission form here. ​​