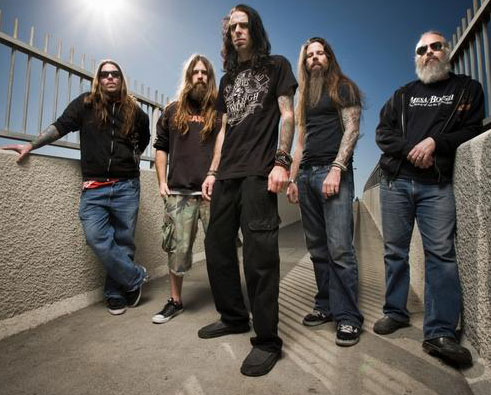 Lamb of God, With The Acacia Strain & Manahan
January 27th, 2012
A good indicator of any concert’s energy level can easily be measured by the behaviour of the crowd waiting outside the show. As I pulled into the parking lot across the street from the Phoenix Concert Theatre on Friday night, I was met by a seemingly endless “LAMB OF GOD!” chant by the eagerly awaiting fans lined-up along Sherborne street. (This despite the fact that I had “Resolution” cranked on my car’s stereo).
I couldn’t help but grin in anticipation as I took my place in line. Admittedly it did take longer to make my way through both the line-up and security (so long in fact that I missed Manahan’s set), but considering we were about to be crammed into The Phoenix like sardines in a can, the extra security was a welcome change. (On a side note, this was hands down - pun intended – the most thorough pre-show pat-down I have ever received).
Once inside I made my way to the main room and through the crowd to the back area, which had been divided up between minors and those of us who were of drinking age.
The Acadia Strain took the stage as I reached the bar and immediately encouraged anyone on the floor to start a circle pit (a request that was quickly and eagerly fulfilled).
Although The Phoenix seems an unlikely venue for a band like LOG’s status, being in such close-quarters with my fellow fans and peers was a welcome change to the larger stadium shows I have attended of late. It also gave me the opportunity to engage (and eavesdrop) in more conversations as I walked around. Rumours were circulating that Sam Dunn (filmmaker and Anthropologist who most famously co-directed “Metal: A Headbanger’s Journey” and the host of my new favourite TV show “Metal Evolution”) was at the show and making the rounds; sparking conversations about his films and this week’s upcoming ME episode.
LOG took the stage shortly after with the second track of the new album, “Desolution” igniting the floor into a sea of limbs as the fans started crowd surfing. “Ghost Walking” was next up, followed by “Walk With Me in Hell” (one of the night’s best performances in my opinion).
I managed to squeeze my way up along the outermost edge of the gate that was keeping the ravenous crowd at bay just in time for “Set to Fail”. I fervently joined the fray of bobbing heads and raised arms (and caught a shoulder to the brow for my efforts), thoroughly enjoying the rib-rattling drum beat and ear shredding that was being administered at the hands of Randy, Chris, Willie, John and Mark.
The Sam Dunn rumours turned out to be true, and he joined the band on stage for a quick thrashing after Randy emphatically announced him as a  “national treasure” for bringing “more awareness” to the metal genre.
After smashing my forearm on the gate during “Blacken The Cursed Sun” I decided to get out of my own way and set-up camp out of the reach of the pit. I negotiated my way up to the side of the stage for a closer view and remained there for the duration of the set - a solid mixture of tracks from Resolution, Wrath and Sacrament, with barely a second’s break in between. (I’d love to see a lung capacity test on Blythe, the man is a MACHINE!)
After a few minutes break the boys were back at it again for a 3-song encore, culminating in the legendary “wall of death” for “Black Label”, which I wish I could say I’d had the guts to participate in, but watched enthralled from the side lines instead.
I’m hoping that more bands will take a cue from LOG and try some smaller venues. Even though it was by far the most crowded I’ve ever been at a show, there’s just nothing like being that up close and personal with the band, the fans and the music.
Lamb of God will be kicking off a set of European dates, but when they make the inevitable return to North America, I highly urge anyone who loves a good metal show to check these guys out.
-Rogue RED for Metal Master Kingdom