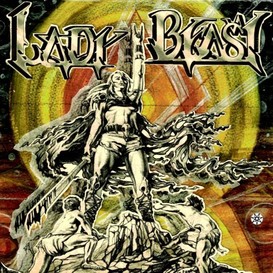 I had the good luck to interview Deborah Levine, lead singer of the Heavy Metal band Lady Beast, and pick her brain about what exactly makes Lady Beast’s gears tick. This energetic Heavy Metal quintet are ready to roar and conquer the world. With their new self entitled album, Lady Beast is bringing in fans that love to head bang and have good time. Download their new album through Inferno Records or order a cassette. Yes you read right. Lady Beast also has cassettes if you can dig out an old walkman from the bottom of your closet or feel like adding a piece to your collection.
I wish them the best of luck and hope to catch them in Toronto soon!
MMK: Congrats on the album release! How does it feel to have the album finally out there?

LADY BEAST: It feels so good to finally exist in the world!!! This album was a long time in the making. Being able to have it out, and now being able to focus on new tunes is awesome! It has already traveled far thanks to the help of Fabien from Inferno Records and other friends we have met through the scene.

MMK: How long did the recording last?

LADY BEAST: We weren’t really working with the biggest budget so we could only take the time we could afford. I would say we spent about 24 hours or so actually recording in the studio. Mixing and mastering were done separate from the studio session. It’s hard to remember specifically, but I believe we recorded in the end of May 2012. It was very soon after Twiz joined the band.

MMK: How was the experience recording with Inferno Records?

LADY BEAST: We didn’t actually record with Inferno. We recorded locally right outside of Pittsburgh with our buddy Dave Watson. It was a really cool spot, definitely the most pro studio I think most of us had been in. We had released the album ourselves on vinyl previous to the cd/cassette release done by Inferno. When Fabien contacted us we humbly jumped at the opportunity to be a part of his awesome work and assist us with getting our music on different formats. There definitely were many moments in the studio that were both entertaining and others where the hours dragged like days haha. We all stayed to support each other throughout the whole process. It was a big deal for us! So a lot of thinking about going to the strip club located next door to the studio and jibbing in the parking lot.

MMK: I read that the name Lady Beast comes from a track of an older band of Deb and Greg. Was it just a random choice that you decided to stick with Lady Beast specifically?

LADY BEAST: Lady Beast was an awesome song that we had kept from our old short lived band Long to Hell. It was almost an unspoken transition. I think it fits well though! I don’t think there lays any deeper meaning to the name. I mean we are all pretty beastie.

MMK: What inspired the creation of Lady Beast?

LADY BEAST: Lady Beast is almost an energy that was created that inspires all to do what they want! It’s important for us to be a strong positive influence on our listeners.

MMK: I love the cover image of your CD, it reminds me of Manowar CD covers. Are you guys just trying to go as old school as you can?

LADY BEAST: Thanks! Our good friend Chris St. Pierre drew the cover. We wanted something that represented the era of metal we play. Also something that popped with color! “Old school” is not something we focus on or use it as a creative template. We just write riffs that we like. It happens we love NWOBHM [New Wave of British Heavy Metal] and that’s basically what we want to play. No frills here!! Just head banging!

MMK: Being someone who doesn’t even own a cassette player anymore I have to ask, vinyl’s are one thing as they’re simply timeless, but why cassettes?

LADY BEAST: The cassettes were in the Inferno deal. They just made a limited run of them so get one while they’re hot! But cassettes were the original way of sharing heavy metal back in the day. I have always been a collector of cassettes so it is nice to have one of my own band!

MMK: Deb, how would you describe your singing style?

LADY BEAST: I never really thought of myself having a style. I was always into very theatrical music as a kid. I also grew up with a lot of classic rock. So I guess I kind of combined the two! Once I found Iron Maiden, Judas Priest and Dio I felt right at home vocally. Its fun for me to test new boundaries and come up with melodies. Sometimes I even surprise myself! I love performing and we all vibe really well together so it all comes naturally.

MMK: Iron Maiden and Judas Priest seem to be a big inspiration for Lady Beast. Are there any newer bands that have caught your attention?

LADY BEAST: Some off the top of our heads were High Spirits, Midnight, Cross Stitched Eyes, Speedwolf, Elvenstorm. It’s funny how we all are still jamming mainly older bands. It’s really not until a live show that I get to listen to new bands. It’s always so refreshing going to a great show, and leaving wanting to hear more from a band.

MMK: How do you guys feel about being compared to bands such as Sister Sin, Kobra and the Lotus and Unleash the Archers?

LADY BEAST: It is flattering being compared to good bands that are doing well. I recently saw Sister Sin open for my idol Doro Pesch this year. They definitely had that high energy metal feel that I think we can relate to for sure!

MMK: How far have you guys toured?

LADY BEAST: We have not been too far out of town. With some member changes, and just normal band stuff, we had to take a lot of time to refine our sound. We have done a couple of shows in Philly, Buffalo, and other Pennsylvanian towns. We actually have our first tour set up for the end of this month! Lady Beast is going to the Mid-West!! Six shows in six days and it is gonna rule!! We couldn’t be more excited to meet, see new bands, and to rock and melt some new faces! After this tour, we tour the world!! Haha Maybe not right after this tour….but soon!

MMK: Who have been the best bands you have played with?

LADY BEAST: We have played a lot of shows. Some of our favorite bands we have played with to date are Superchrist, Argus, Metalian, Midnight, Evil Survives. It’s always a hard question because it is hard to name everyone!

LADY BEAST: I would say our shows are just a good heavy metal time. High energy! We are always told we look like we are having a great time while we play. It’s because we are!! We all love what we do, it’s not an act, and it shows in our music and live performances.

MMK: When you guys aren’t playing, what do you do?

LADY BEAST: When we are not playing music we all have a variety of jobs and hobbies. Tommy (Guitar) is an electrical wizard and is always playing guitar. Twiz (Guitar) is a photographer and has an awesome online guitar forum. Greg (Bass) is a bartender and runs a local record label Cobra Cabana Records (which our vinyl is released with). Adam (Drums) is a screen printer who is responsible for ours (and many other bands) awesome shirts and patches. I (vocalist, Deb) run a small environmentally friendly house cleaning business called The Metal Maids haha. It’s not just a name! So we obviously keep busy. But it’s all worth it to have the time to rock!! 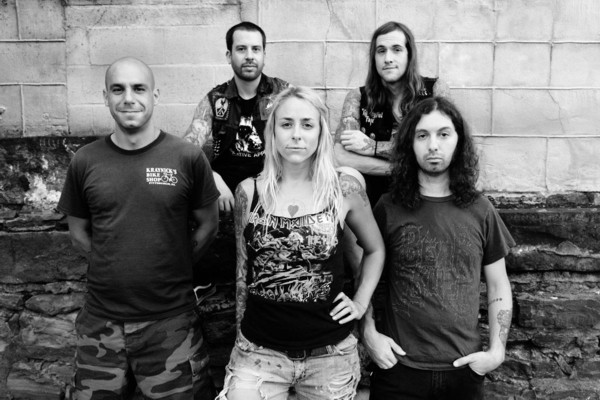