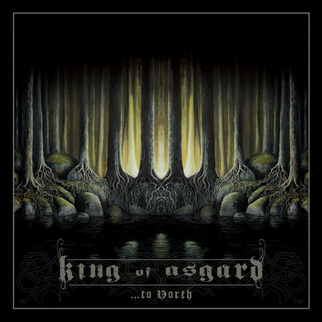 As indicated in their name, King of Asgard dwell heavily in the realm of Norse culture and accompanied with an epic, battle-ready Death Metal sound. Their raw-boned sound incorporates more aspects of the Scandinavian Death Metal sound personified by Dismember, Dissection and early In Flames as opposed to the American Death Metal sound. Also refreshing is the epic and triumphant mood presented on many of their songs. Reminiscent of a gallop into battle, their distinctly Scandinavian sound displays an often melodic tone that is at once uniting, yet equally as menacing as a gore-themed band. Arguably, one of the band’s greatest assets is the ability to stay true to their subgenre and unique sound while never fearing to venture into other musical areas through incorporation elements often found in other Metal realms.

King of Asgard formed in 2008 and progressed to their current status very quickly, earning a deal with Metal Blade Records in 2009 after their demo Prince of Märings caught the label’s eye. Since then, the band had released their debut album Fi'mbulvintr in 2010 and their newest release …To North in 2012. As a whole, …To North features a lot of gravel-throated, yet surprisingly intelligible vocals from Karl Beckman. The mighty wall-of-sound present on this album makes great use of buzz sawing tremolo riffs and hammering drums, accentuated by a thick bass sound. Also refreshing are the elements of surprise found in the album. Occasional war-chant choruses, use of acoustic guitars, piano and traditional Viking instruments are not always expected, but create a rich, diverse sound which punctuates the album’s more brutal moments. Another pleasant surprise was the use of female vocals provided by guest singer Heléne Blad on “The Nine Worlds Burn,” the album’s opening battle cry. Her operatic vocals don’t enter the song until the last third, but their presence provides an epic, yet haunting layer of atmosphere to an already kick-ass track.

King of Asgaard accelerates the momentum through the rest of the album. While some sections begin to sound alike, bordering on routine for the band’s standards, their intensity and skillful execution always keeps listeners in check. The amount of range on the album, present through guest musicians, occasional use of folk instruments, moody sound effects and tracks that dare to change tempo are guaranteed to hold listeners’ interest.

Also noteworthy is the strong medieval atmosphere present on this album. The band enhances this mood through the use of Vikingesque, chanted backing vocals that accompany Karl Beckman’s leads on “Gap of Ginnungs,” “Up on the Mountain,” and “Harvest (The End).” The chanted backing vocals on “Up on the Mountain” invoke a rather haunting sound, which mixes well with the unpredictable change of pace and almost spoken vocals in some sections of that song, making it one of my favorites on the album along with “The Nine Worlds Burn.” On “Gap of Ginnungs” and “Harvest (The End),” the backing vocals create a mammoth-scaled, indestructible sound, reminiscent of uniting with a formidable army of fierce warriors, which continues the triumphantly menacing sound the band has mastered.

King of Asgard’s war-like brutality and intensity is forged with epic melodies and many surprises that will please metalheads who crave these elements. Also noteworthy is that due to their diversity and Scandinavian Death Metal influences, their music might even appeal to metalheads who steer clear of American Death Metal; even those who think Death Metal is talentless, non-diverse noise might find admirable traits on this album. While aspects of their music might sound a bit similar to a lot of other Scandinavian Metal bands, their willingness to experiment and venture slightly outside the subgenre while maintaining the sound they’ve created keeps them from becoming too repetitive. The amount of surprises and variety on the album captures the listeners’ full attention and the grand execution leaves us wanting more from this band, anxiously awaiting future releases.