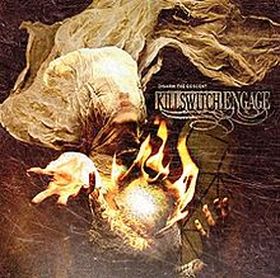 You absolutely cannot have a conversation about metalcore without talking about Killswitch Engage. The Massholes have been coined the founding fathers of metalcore, and are easily one of the most influential bands in the genre. Ever since the release of their last self-titled studio album in 2009, the band has been touring non-stop, and in early 2012, some shocker news came from the band where they announced that vocalist Howard Jones was leaving the band.

About a week later, the band welcomed back original vocalist Jesse Leach, and started the song-writing process for their brand new studio album. The band toured extensively throughout the summer of 2012, playing major festivals overseas, as well as a spot on Metal Hammer's Trespass America tour alongside Five Finger Death Punch, Trivium, Emmure, God Forbid, Battlecross and Pop Evil. Over the course of the summer, a new song entitled "No End In Sight" was leaked on to the internet, and slid into the setlist of Killswitch's summer tour, confirming the song title, with the exception of Europe. In late 2012, the band toured throughout North America where they played their sophomore album "Alive Or Just Breathing" in its entirety in celebration of its 10th anniversary, and continued the writing process while on the road.

Jesse has never sounded better vocally. His combined style of harsh and melodic shines brightly on all the tracks in tandem with great riffs and hooks, namely on tracks such as "The Hell In Me", "In Due Time", "The Turning Point", and "Time Will Not Remain". The harmonized vocals in the chorus in "Time Will Not Remain" gave me massive goosebumps. Tracks like "The New Awakening", "You Don't Bleed For Me" and, "Beyond The Flames" are solid metalcore juggernauts, that all contain stand-out elements. "New Awakening" and, "You Don't Bleed For Me" are both crushers, but, "You Don't Bleed For Me" contains a catchy chorus that goes exceptionally well with the heavy riffs, whereas, "Beyond The Flames" has a bit of a melodic thrash feel to it.

The band tones it down a little on, "Always", where Jesse gets to rest his throat from the harsh screaming and deliver some delightful melodic vocals and a soaring chorus, and Adam Dutkiewicz, as always, delivers some heavy riffs underneath.

In metalcore, you know what to expect from the songs. Great riffs and hooks, and a mix of both screaming and melodic vocals. With the rise of so many metalcore bands over the last 15 years, a typical song structure of a metalcore song is almost a household name. Some listeners may get that feeling with Disarm The Descent.

Nothing new comes from behind the curtain on the album, but Killswitch Engage have definitely topped their previous studio effort.

Lows: A few repetitive song structures, and some over-produced vocals.

Bottom Line: Killswitch Engage with the original voice comes roaring back to life with a beautifully solid and well-written album. This is the album Bullet For My Valentine wishes it wrote.

The Hell In Me

A Tribute To The Fallen

All That We Have

You Don't Bleed For Me

No End In Sight

Time Will Not Remain