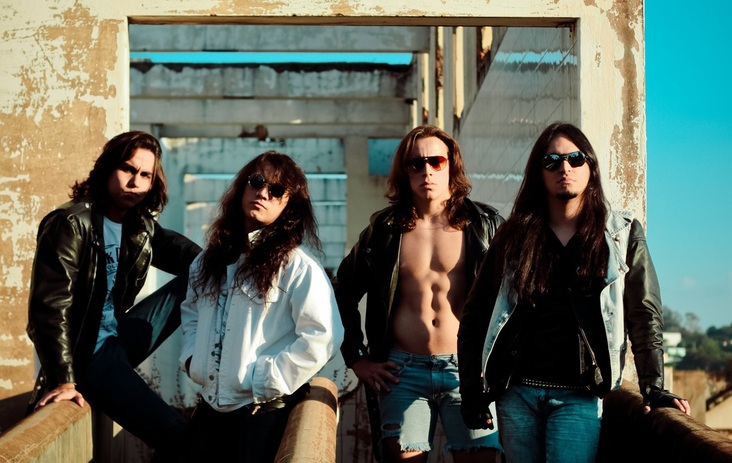 Do you miss the hard rockin’ music of the 1970’s and 1980’s? Are you tired of listening to the same songs from that era played over and over again on your nearby Classic Rock radio stations? Then take a listen to Killer Klowns.

I don’t write reviews for anything except Metal bands. However, I am making an exception for Killer Klowns. Those Hard Rock and Pop Metal bands from the 70’s and 80’s like Aerosmith, Def Leppard, Motley Crue, Kiss, Guns N’ Roses, Van Halen were the precursors of today’s metal bands and I hold them in high regard for their contributions past and present. Killer Klowns is a Brazilian band whose mission is to recreate the sounds and energy of those Hard Rock bands from that era.

“Rollercoaster Ride”, released through DEFOX Records/Heart of Steel Records, does indeed take the listener on a screamin’, supersonic rollercoaster ride with twists and turns and a some slow climbs up the rails and sends you back down at breakneck speed again. The opening song, Until the End sets the mood and the pace for this hard-driving Rock album. Busting out with the vocals by William, reminiscent of Sammy Hagar, cue the guitar followed by the heavy bottomed bass and driving drums. Next up is Roller Coaster Ride with lyrics “We are the Killer Klowns. We take you up and down” and “Welcome to our rollercoaster ride.” It’s a good time song made for singing along.

I was especially impressed with William’s vocal range and his ability to recreate the vocal styling of many different singers that fans of 70’s and 80’s Rock music will recognize.

The 6th track, Wild Place, showcases a more than capable Teets performing a dueling guitars solo. My only complaint is that it was too short.

“Rollercoaster Ride” has a total of 11 tracks and is Killer Klown’s first full-length album release. I didn’t find even one song on the album that wasn’t an excellent example of what the Hard Rock bands of yesteryear released for FM radio and MTV listener’s pleasure.

“Rollercoaster Ride” is available for download from ITunes, Amazon, Spotify, Emusic, Deezer and many other internet outlets. Check it out, you won’t be disappointed if you miss the epic Rock ballads, Power Metal and Hard Rock music of a simpler time.