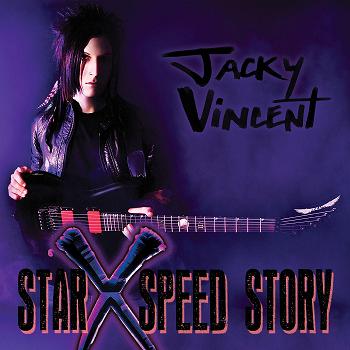 You may have already heard about Falling in Reverse, an American hardcore/screamo band that started to play around the year 2009. These guys have started to reach quite some fame not only nationally, but internationally as well. They even participated in the 2012 Vans WARPED Tour, and more, they opened for Guns n' Roses that same year.

But I'm not here to talk to you about them, it's the guitarist, Jacky Vincent, who really caught my eye; a natural, talented musician of British origin that has stood out throughout his career for his ability with this instrument. This he owes to his many years of study and versatility.

Jacky recently released his début album Star X Speed Story, a bold and drastic move, because this album is charged with power/speed metal (just as its name suggests), with a bit of symphonic and progressive qualities, quite unlike the hardcore/screamo of Falling in Reverse. The arpeggios and complexity can be appreciated and are a similar style as that of Joe Satriani or Steve Vai, who have inspired Jacky's work.

The thirteen pieces that make up Star X Speed Story are purely instrumental. Jacky Vincent's guitar ability carries the tunes, sometimes alongside with the keyboard. All of the tracks have clean distortions, diverse rhythms, and a smooth flow. This album brings back memories of F-Zero X for Nintendo 64, and other video games soundtracks as well.

Star X Speed Story may not provide something new to the genre, but in this album Jacky Vincent shows off his talent, and he demonstrates to us that he is up to the challenge of conquering any music field he desires.

In summary, it's easy to like this album. It's a complex piece of art metal fans will love! Jacky has a brilliant start with Star X Speed Story; and I’m sure this project will take him very far. Can’t wait to hear new releases!