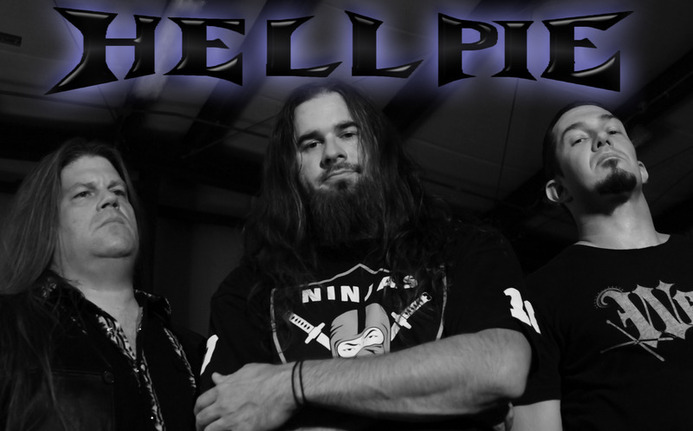 HELLPIE is a delicious blend of musical spices with savory chunks of rock, metal and punk in a bitter red sauce baked within an earthy herbal crust. HELLPIE tends to go well with red, white or Thunderbird wine. In fact most ales, spirits and frames of mind go well with HELLPIE. Above all, HELLPIE is about good times and delivering great tunes to our craving fans.

That’s what they say. Now my say.

One Good Feeling. Hell, yeah! I thought I heard a lizard vomiting. That reminds me of waking up one afternoon back in the day when MTV actually played music videos and I got caught up in the middle of a Metallica song. James Hetfield sounded like a vomiting lizard and I liked it. I mean this in a good way.

Make Me a Double. Like Nashville Pussy without the Pussy.  Raucous and party rock, hard & heavy.  Oh, oh! “Come on, bartender, line em up…….!” Yeah, I didn’t miss the George Thorogood and the Delaware Destroyers influence. You guys are really from Delaware, aren’t you. I mean that in a good way.

Idiots Are Everywhere. That’s the most Metal sounding song I listened to up to this point.

OK so who wants to die? This one has the Black Sabbath feel and influence to it. The intro, I meant, after the stuff that sounded like the ending of one song and the intro to another and nobody was on the same page of music. It sounded good.

Lost for Words. It’s Heavy. It’s Sludge. I was going to compare Hellpie to another band due to this song. Nope. It’s all Hellpie’s song.

OOWAH. Nice bit of bass under the vocals. Yeah, the guitar with its Arabic influence is good, too. Wait……….wtf? Oh, yeah, just jumping into Warface battle mode is a cool transition.

Okay. I had a great adventure listening to Hellpie. There are more songs. Take a listen. I could write all night about Hellpie, but a time comes when I’d just rather listen and enjoy and soak it all. It’s not all Metal, but it’s all good.

Did I mention that sometimes while listening to Hellpie I was reminded of Dave Mustaine’s cheeky sounding vocal styling, but Eddie Simpson sounds like he has a bigger pair? I mean that in a good way.