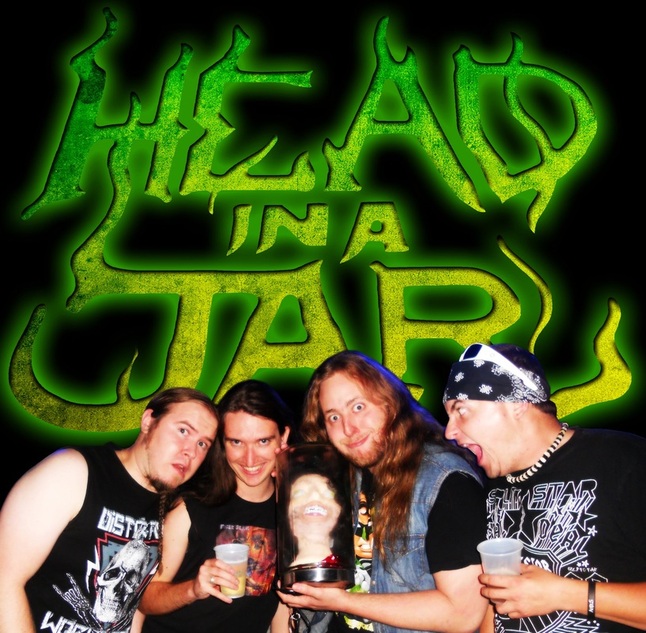 Head In A Jar

Head in a Jar is Thrash Metal and the band describes itself this way: “Melting faces is our business... and business is improving.” And this: Head in a Jar is a 4 piece thrash metal attack hailing from the grimey dungeons of Sydney. We are a young yet ferocious band with our original thrash sound and circus like live show already blowing minds of local scene-goers. If you're a fan of old school thrash, silliness, fun and banging your head off, Head in a Jar is perfect for you. We started gigging in April 2011 and we released our debut EP 'Atomic Circus' in Oct 2011.”

I sat down to listen to “Atomic Circus”, but sitting didn’t last very long. I had to get up on my feet to enjoy the EP to its fullest extent.

This band provides my artist’s mind with a multitude of imagery. Listening to Bloodsport I imagine combatants engaged in a frantic competition, flailing at guitars and drums, their blood splattering the surrounding spectators, leering at the horror and cheering for more.

Judge Mental is for me the least exciting song of the four on “Atomic Circus”. Don’t get me wrong. I am not denigrating the song. It’s a straight up worthwhile Thrash song. For me it’s a song made for mindless headbanging instead of thoughtful listening. Yeah, I would totally enjoy this song live, in a mosh pit at a Head in a Jar show.

Yeah, circus like, as Head in a Jar describes its music, and I mean that in a good way, as I am sure the band members do as well. Listening to King Gnawicus, I imagined myself sitting in a theater, witnessing a Metal Musical. Visions of a lit stage, costumed characters singing and playing musical instruments flowed through my head. Perhaps there was a small supplemental orchestra and choir accompanying the performance, hidden in a darkened pit immediately in front of the stage. Rising flames, billowing smoke and a multitude of imps darting about completed my vision. There are multiple changes in the tempo and a wide range of texture to the composition. I liken King Gnawicus to a mini-Metal opera.

The song, Head in a Jar, breaks out in an immediate frenzied Thrash drum tempo and never falters. It has less exaggerated musical change ups than King Gnawicus, but the great vocal styling’s of the band’s singers and their quick deliverance of the lyrics are just as exciting.