Late great guitar hero “Dimebag” Darrell Abbott of PANTERA and DAMAGEPLAN fame was born on August 20, 1966 in Ennis, Texas and he went on to leave one of the most indelible marks on the metal music landscape during his reign as King of Heavy Metal Guitar Shredders during the 1990′s. His infectious smile and laugh were no match for his explosive talent and the ‘take no prisoners’ approach this six string magician took to lighting up the fret board like no other before him or since. He never quit battling for the music he loved so much when metal was being kicked around good by Grunge and Rap.

After a change of lineup and musical direction at the end of the 80′s, Dime and his Cowboys From Hell soon smoked the music world with classic releases: Cowboys From Hell (1990) and Vulgar Display Of Power(1992), ultimately notching the #1 spot on the Billboard 200 with Far Beyond Driven in 1994, establishing Pantera as the biggest metal band in the world at that time. They simply stole the show from any band they shared the stage with. When most would be slowing down after this kind of success, Pantera turned in what many critics feel is their crowning achievement in 2000 with Reinventing The Steel. The beloved group would shockingly disband in 2003 over internal tensions that saw vocalist Philip H. Anselmo and bassist Rex Brown depart to perform in their other project called DOWN.

Dimebag was sadly shot and called on the evening of December 8, 2004, at the Alrosa Villa in Columbus, Ohio while performing with his new band project he had formed with his brother Vinnie Paul called DAMAGEPLAN. A crazed former Marine stormed the stage and shot Dime in the head at point blank range in front of the stunned live crowd. Several others in the club that night – trying to help save the guitar legend – lost their lives with Dime. A police officer would eventually kill the gunman and put an end to the darkest event in music history.

The metal community mourned… hell, it is still mourning the loss of Dimebag to this very day. 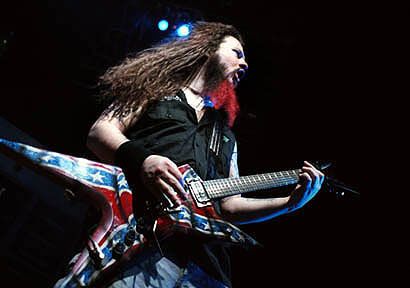 What made him so special? It’s not hard to figure out when you talk to his close friends that share memories of a special soul who was always quick to make people laugh and feel good about themselves. Dime always was the center of the party but when you were in his presence he made you feel like you were the most important person. That’s how he felt about his fans. He loved them more than any performer that has ever graced the stage in music. How many famous musicians can you think of that actually shared drinks with fans after a show?

On his birthday today, let’s not forget what ‘metal music’ meant to Dimebag. Let us not forget his commitment to greatness and the incredible love he had for his family, friends and fans. Let us not continue to diminish his memory, his incredible guitar skills and gift for creating such wonderful music over bitterness, anger and hatred.

He was truly one of a kind. So let’s do all we can to keep celebrating the Dimebag Darrell musical legacy in unity as he would surely want us to. Watch it go!