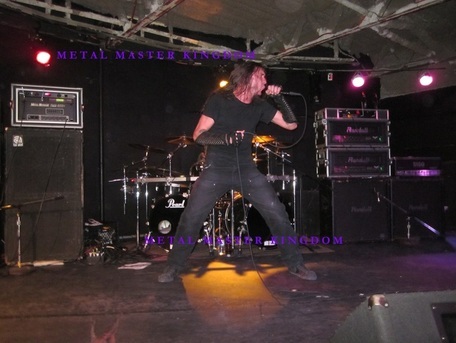 Goatwhore and Lock Up at the Annex Wreckroom in toronto

Show on Sunday February 12, 2012
Greetings Legions,
First, and foremost, Happy New Year MMXII! May all your dreams come true - or not  (Sorry, I just realized that this is my first post of the year, and thus one's got to start with the right foot). Moving on, Yours truly is pleased to report some serious metal activity, once again, from Canadian grounds. I have been back in the country for less than a month, and yet it seems that there have been shows going on every single day - Jesus "Give-my-pocket-a-break" Christ! Given that, at the moment, I happen to be on a rather tight budget (due to my high addiction to excellent times in Colombia), I see myself forced to pick only one show per month. In February, the winner by default was, LOCK UP and my beloved GOATWHORE. Well, at first, this spot was reserved for Dark Funeral and Inquisition, but given that they canceled their North American tour (or postponed it until further notice, for that matter), I was pleased to replace them with the above show. Yes, I know there are tons of other shows but under my watch Kittie will never be an option, I have already seen In Flames and no, I will not pay to see Trivium. I'm not a big fan of neither Iced Earth nor Machine Head and Eww Suicide Silence! Hope that answers any possible suggestions.

As always, it was a pleasure to see New Orleans’ Goatwhore, a band that has been making incredible music circa 1997. This was my third time seeing them and so far, I have absolutely no concerns. The first time I had the chance to watch them LIVE was when their album Carving out the Eyes of God came out (2009). They were touring with the guys from Daath and Abigail Williams (Daath = awesome! A.W= Not so awesome…).

The second time I saw Goatwhore was when they opened for the Almighty Watain at the Opera House. Here is where they completely stole the show and made the Almighty Watain look not so Almighty after all. Their set was the Black Metal equivalent of a children's lullaby, or at least seemed like one, given that around midnight, I fell asleep to the point that I almost banged my head against one of the rails at the Opera House. Maybe the show was not as boring after all and I was simply drained from all the head banging I did through the Goatwhore set, either way c’est la vie and as we all know: Shit happens, period.

I was thrilled about having this band welcome me back into the Canadian metal scene and, as mentioned before, I was not disappointed.  Even though the venue was not packed, the crowd roared to songs like The Black Art of Deception, Carving out the Eyes of God and, a favorite of Yours truly: Apocalyptic Havoc. For those of you who have not been fortunate enough to be baptized by the Love of the Goat, I urge you to please listen to the following song:
http://www.youtube.com/watch?v=OLFtQ90H6O4

Given that images speak louder than words, here is a sample of what took place at the Annex Weckroom that evening.  Sometimes it is incredibly difficult to capture good shots at this venue due to the awful lighting setup. Either way, la-voila:
http://www.flickr.com/photos/abriceno/sets/72157629367332713/with/6895248361/
Furthermore, this experience would have not been completed if it had not been for Lock Up. Mind you, having the pleasure to see one of Grindcore’s supergroups is an absolutely priceless experience for various reasons:

Lock Up is the musical epiphany of what a S’more with some maple syrup would be: Simply perfect. Not only are they phenomenal musically speaking, they also have an almost ethereal line-up and they rock big time while on stage (Oh, trust me, that last aspect is not always a given).

One is able to appreciate life’s simplest pleasures, especially when one gets to see some of one’s more idolized musicians sharing the same stage, at the same time. Unfortunately for me, and for the rest of mankind inhabiting the Arctic Circle, Mr. Shane Embury did not play this time, which shattered my heart completely. Yet, Nicholas Barker's presence acted like Home Hardware’s strongest super glue, and by the time the band started its set, I was a happy camper.  Songs like Brethren of the Pentagram, Accelerated Mutation and Slaughterous Ways entertained the audience, as Mr. Lindberg controlled the atmosphere with his insane energy. The word I would use to describe this whole experience would be “rewarding”.

Unfortunately, due to unforeseen inconveniences, I was forced to leave the venue before the band entered their Grand Finale. Still, I had a marvelous time and I am glad to have been able to support them this time. I will see you again once you convince Shane to come say hello to us Maple Lovers :).
Oh, and before I forget I will leave you with some of the shots I captured while I could: http://www.flickr.com/photos/abriceno/sets/72157629387688595/

If you have not had the opportunity to submerge in a Lock Up experience, first of all, you have been missing out. However, since we are not here to judge anyone, here is my Lock Up recommendation for you, fellow Metal Head who are dying to get an overdose of some serious Grindcore:
http://www.youtube.com/watch?feature=player_embedded&v=iK0xHGoqOHE