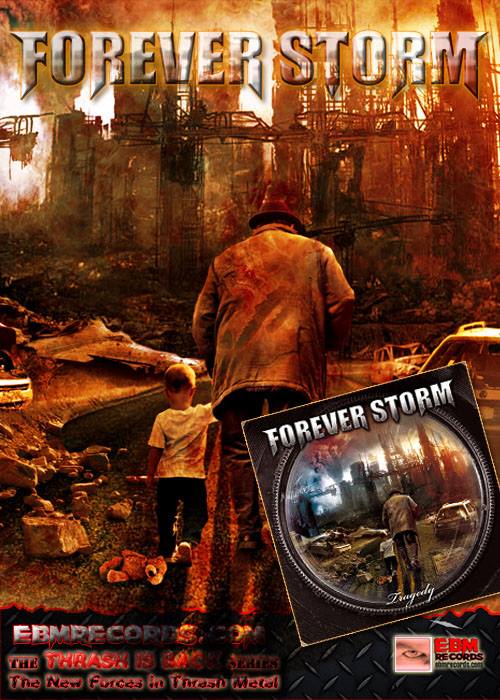 Serbia may not have a massive metal scene at the moment, but me being of Serbian background, am proud to know that Serbia does have a growing metal scene. While much of the old guard of Serbian metal bands has disintegrated, with only a few remaining, people started to question the future of the Serbian metal scene. Don't worry though, there are several great metal bands emerging from all around Serbia at the moment such as Trigger, Stratus and Draconic to name a couple, but in my honest opinion, the one band that is more than worthy of being the true contender for the Serbian metal throne is Forever Storm.

Forever Storm hails from the city of Kragujevac and was formed in 2006. A perfect way of describing the band's style would be Iron Maiden-meets-thrash with hints of power metal and progressive metal. The band has played at some of Serbia's biggest rock festivals such as EXIT, Rock On and Rock Village. The band released their first album Soul Revolution in 2009, and began promoting the album by playing all across Serbia and Croatia. The band played at Wacken in 2010, and won 3rd place in the festival's Metal Battle contest among 28 other bands from around the globe. The band recently completed their long awaited new album Tragedy, which this review will focus on, released in November 2013, and are currently signed to EBM Records.

The album kicks off the with the battle march vibe and the soaring twin harmony leads of "Inceptum Finis", and leads into the ferocity of the second track "Mother". A demo version of the track was released by the band long before the album was completed. Track 3 "Made Of Lies" contains one of the finest middle sections ever composed, with a soulful piano solo that leads into a two-part guitar solo, starting off soaring and melodic, leading into a chaotic and shred-tastic conclusion. The intro twin-harmony lead on track 4 "Forever The Same" is extremely tasty and happily uplifting, which is an element that power metal fans have come to love, and almost has a DragonForce feel.

Track 7 "Carry On The Flame" is the album's ballad. It’s probably the biggest chorus on the whole album, which will work perfect in a live situation where the whole crowd will sing along. The band heads into old-school thrash mode on tracks like "Paradox", "City Of Vultures" and "Death Comes Alive", where the riffs are driving and aggressive, and the solos are both melodic and chaotic. Stefan also unleashes some beastly vocals on the tracks. "Paradox" is the oldest track on the album because, like "Mother", was released long before the album's completion, which gave the fans a sneak peek of what was to come. The album closes with the instrumental "Euthanasia For Mankind", which was the album's original title. While it's another one of the slower tracks on the album with soaring riffs and harmonies, it's the perfect song to close out an incredible album.

What I like about Forever Storm is that while they're also classified as a power metal and progressive metal band, and power metal being stereotyped for epic song arrangements and very long songs, I like how Forever Storm isn't about overloading a song with as many musical elements and riffs as they can and making a song as long and epic as possible, it's just straight-to-the-point, simple but exciting song arrangements and compositions. Stefan's vocals are very much in the style of Bruce Dickinson and Hansi Kursch of Blind Guardian. Drummer Vuk Stefanović may not be the flashiest drummer in the world, but he knows exactly which part to lay down for a certain part of a song. Miloš Miletić delivers a perfect balance of musical and flashy guitar solos, and delivers some delicious harmony leads along with Stefan. The harmonized vocals between Stefan and bassist Vladimir Nestorović in the choruses give the songs a huge sing-along feel when played live, especially on tracks like "Nocturnal Wings" and "Carry On The Flame".

I think this album is capable of pleasing every metal fan, from the ones who love the hard edge and aggression in thrash, to the ones who enjoy the most emotional, soulful and beautiful melodies. If you're a fan of Iron Maiden, Blind Guardian, Gamma Ray and Helloween, you'll love Forever Storm. The classic value is instantaneous with this album. Buy the album and support Forever Storm! ŽIVELA SRBIJA!!!!

Highs: This album is an instant classic, and I'm not saying that just because the band is Serbian and I'm of Serbian background, I truly feel it and mean it.

Lows: Absolutely nothing major to complain about at all. This is a fantastic heavy metal record.