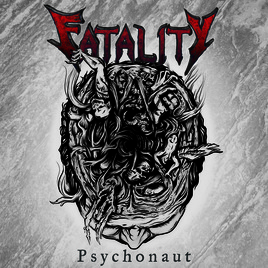 On June 28th 2013 Fatality’s new album Pychonaut was released unto this world. What other way could these Canadian thrash monsters celebrate than by having an insane release party that also doubled as a show. Fans, friends and metal heads from all over made their pilgrimage over to Sneaky Dee’s to get their first taste of Fatality’s thrash baby. Along with heavy metal bands Call of the Wild and Shotgun Cure, the night was destined to be full of good times and great music.

Call of the Wild took the stage first. As is tradition in local Toronto shows, they started their set a good hour after the doors opened allowing us late comers just enough time to run up to the second floor of Sneaky Dee’s and grab a quick beer. Call of the Wild wailed into their first song, reviving everything I love about heavy metal. Thick manes, leather vests and high pitched heavy metal cries. Though the acoustics of the venue didn’t do vocalist Serg much justice, he still hit those high notes and then some. Shredding alongside him is female guitarist Cyndi Zhang. Yes, you read it right: a chick shredder! And a talented one to say the least. If there was a single person that left Sneaky Dee’s without having a huge crush on Zhang they must be blind and deaf. Call of the Wild transformed before our eyes as they began to incorporate some heavier arrangements and the occasional growl into their songs. By the end of their set, we were ready for some heavy thrash.

Shotgun Cure tore up the stage next. Their aggressive intro coupled with their powerful presence made them a band that was hard to look away from. Don’t let Harut Savchenko’s baby face fool you. He is packing a powerful voice that tops off this thrashy/progressive band. Shotgun Cure is a headbanger pleaser that’s out for a good time. From their engaging headbanging sessions with the crowd to the random titles of their tracks such as “Stewart Has A Respectable Penile Grip” and “Jeffrey Has Below-Average Penile Grip,” this band is on stage to make sure everyone has as much fun as they are. Though the original tracks and works in progress that they played received an amazing response, my personal favourite heir cover of “Foxy Lady.”It was so groovy that I expected Garth from Wayne’s World to appear out of nowhere humping the air.

Next up, making their dramatic entrance to the stage, were the headliners of the night Fatality. These boys really know how to please their audience. They started off with the first track of their new album “Enter Purgatory", which essentially describes the rest of the night. The pit immediately opened up and only grew as Fatality’s set progressed, the strobes and fog machine created a great ambiance and Fatality smashed that stage. They followed “Enter Purgatory” with the first single off their new album and track to their new music video, “Thoughts Collide”. At this point people are desperate to get a better look at the band and are climbing up on chairs to get a better shot. Up front hair is windmilling like crazy and behind the headbangers the pit is full of smiling dudes making the floorboards shake. For a minute I was afraid we would crash down onto Sneaky Dee’s lower level nacho eaters. But the floors held and so did the fans. When Fatality started to play their second single, “Monstrous”, everyone who was trying to hold back just couldn’t help themselves, including myself. Running past the pit I kept my word and got up front and centre, headbanging and singing along to their insanely catchy chorus “Monstrous! Infinitely, Endlessly, Monstrous!”. My knees were blackened by the morning thanks to the knee high stage against which I constantly crashed against. But it was well worth it to be in the thick of it. Towards the end of their set, Fatality decided to up the ante with a beer giveaway and chug match, a Fatality favourite “T.F.E.S” from their older album and a heavy cover of Ice-T’s “Body Count”. The night wasn’t over until they ended with the final song off of Psychonaut, the aptly named sequel to their first instrumental marvel, “Thrasterpiece II”.

Fans gratefully received Fatality’s new album. Some moshed, some danced, others took their shirts off or shook their asses. There was even some successful crowd surfing despite the low roof of the venue. I’ve never been to a show where smiles are all around. From the band to the fans, even those in the pit getting pummeled, all I could see were grinning faces and people having fun. I hope they get this much love on the rest of their tour.