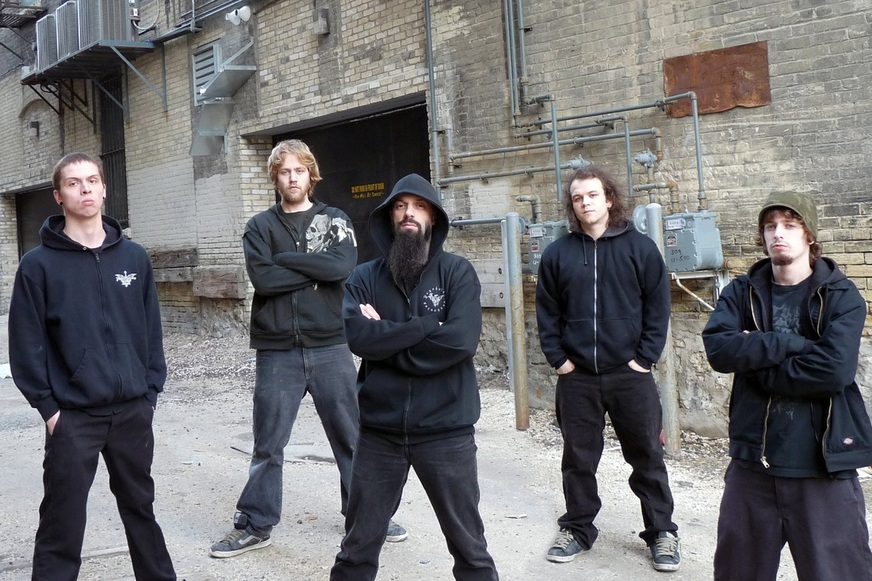 Similar to the stories of most modern day bands, Eyam formed out of the ashes of other groups. Mike Janssen and AJ Schmid joined forces in 2007, originally playing in a progressive punk band. As their music progressed members Tomi Stangl(Drums), and Kevin Focht(bass) were added. It wasn't until 2010 that vocalist Chuck Labossière joined the band and Eyam played their first show, and following with a West Coast Canadian tour.

Eyam's most recent effort is a 5 song self-titled EP, which includes songs such as “Architects of Starvation”, “The Dawn of a New World”, “The Great Disease”, and “Cosmic Intervention”. Eyam has plans to return to the studio to record their first full length. A title has not been chosen yet, but I'm sure we will not be disappointed.

When I first heard that Eyam formed from the roots of a progressive punk band I was a little curios to hear what they would sound like. I was completely surprised by what I heard. “Architects of Starvation”, is a strong effort by the Canadian natives. Start to finish the guitar works offer a great combination of melodic harmonies, mixed with black metal overlays, aggressive speed, and heavy grooves. By far what tied this song together for me were Chuck's vocals. Deep guttural grunts mixed in with some nice high pitch backing screams. Throughout the song it's what stood out to me the most, on the breakdown is where you could hear the most of what they were looking to achieve. Some of the eeriest sounds highlighted with vocals and guitar, really put this song together nicely. I was greatly impressed by where “Architects of Starvation” took me, a musical journey through all aspects of Death and Black Metal.

“Architects of Starvation” can be purchased digitally through most online distribution portals. We can expect to hear more from Eyam in the months to come. Eyam definitely has a good formula here, great music, and lots of creativity.