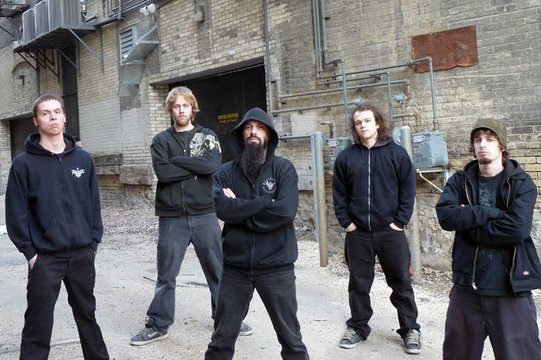 As a band what would you agree was your most successful song and why, and individually what are each of your favorite songs?

Eyam: Some of our more popular songs are The Great Disease, Cosmic Intervention and Insect Vector because they have an online media presence(youtube, reverbnation, etc.).
Chuck(vocal): It's like trying to chose your favorite child. I love them all equally for different reasons.
AJ(Guitar): Insect Vector is my favorite.
Kevin(Bass): I like Bacterial Cross Contamination because I like the way the riffs flow together.
Mike(Guitar): Architects of Starvation is my favorite one to listen to. My favorite to play would be a newer one called Parasitic Breed. Tomi(Drums): Cosmic Intervention.

The Canadian music scene seems to be spurring a lot of metal bands lately, from my outside perspective. Would you say that's true or has metal always been so predominant in your area?

There's always been a lot of great bands but lately it seems to be on an upswing.

Have you ever or do you ever plan to tour in the States?

We would love to play the states, and we definitely plan on it, but its difficult due to acquiring work visas, etc..

If you could jam with any artist who would each of you pick?

The music scene everywhere is dwindling and metal has always been the underground lord of music, what pushes Eyam to keep going, where do you pull inspiration?

Well when it comes down to it, we are in this for the love of the music. The live performance aspect is also awesome because we get to interact with our fans and like minded people.

The goal is to have a larger fanbase in Canada by touring coast to coast. We have a boatload of new material that is waiting to be recorded, and a video that is nearing completion. 2012 should be a productive year for Eyam.

If you could say anything of significance to the readers what would it be?

We are in the finishing stages of our first music video for a track off our debut self-titled EP which is entitled Architects of Starvation. Eyam will be hitting the studio early 2012 to record our first full length album. Check out these links for any news, tour dates, music and video: