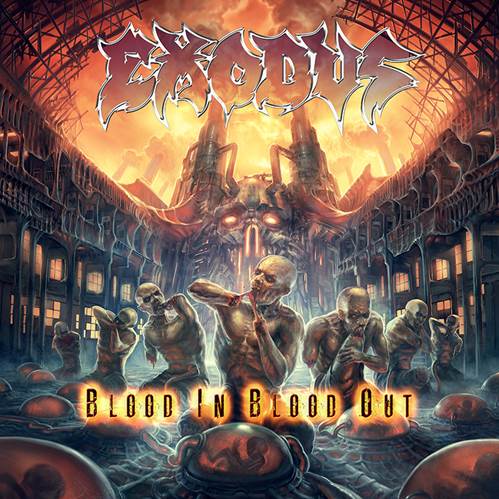 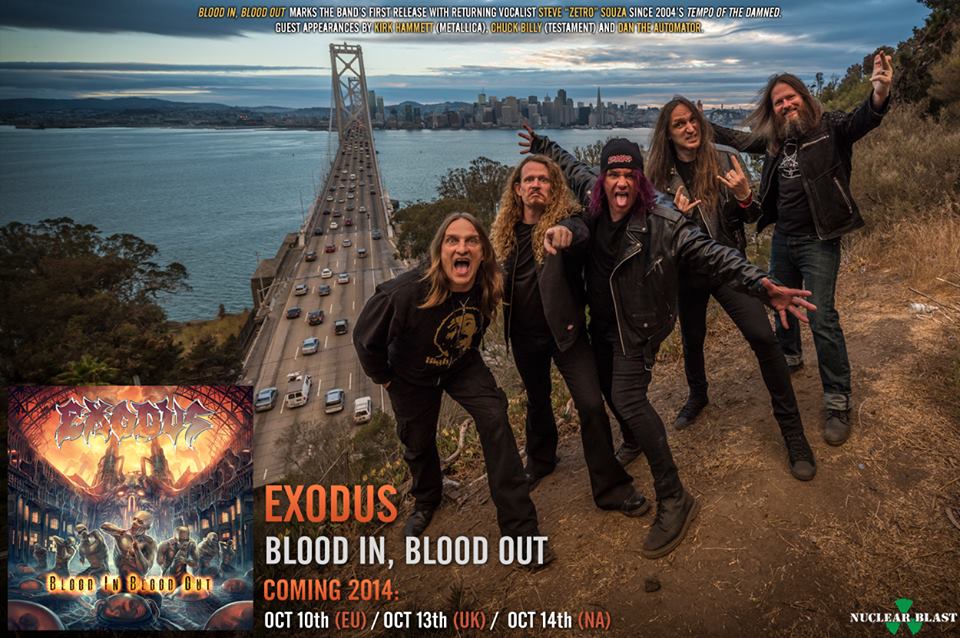 Highs: Standout tracks include "Black 13", "Blood In, Blood Out", "Salt The Wound", "Body Harvest" and "Wrapped In The Arms Of Rage"

Lows: Fans who wanted Rob Dukes to sing on the album are SOL.

If you think back, Motorhead pretty much inseminated the seed that became thrash, but from what I learned after talking to some Bay Area band members a few years ago, Exodus was really the band that kickstarted the thrash scene in the Bay Area with Metallica coming in shortly afterwards. After 4 years of touring on the last record: Exhibit B: The Human Condition, Exodus are finally ready to unleash their latest offering of Bay Area thrash brutality entitled Blood In, Blood Out, and let me just say that after listening to this album, it's clear that thrashers all across the globe are in for a real treat. The surprises on this album are no secret right now, as we all know that Steve "Zetro" Souza is back behind the mic after the spontaneous dismissal of Rob Dukes earlier this summer, and the album's guest appearances of Metallica's Kirk Hammett and Testament's Chuck Billy just escalate the excitement even more.

There is absolutely no screwing around on this album. The industrial intro for the first minute and a half of "Black 13" might throw some people for a loop, but it's actually a great addition because it holds a uniqueness. It slowly increases in volume until the initial riff comes charging out of the gate at ridiculous velocity and transforms into a vicious full-scale thrash assault with Zetro's signature serrated vocals slicing through the riffs like razor blades. The throttle is pushed even further on the title track, which will transport old-school thrashers back to the 80s due to the nostalgic lyrics talking about raging in the pit, almost paying homage to "The Toxic Waltz", "Metal Command" and "Bonded By Blood", and even referencing the late great Paul Baloff. When this song is played live, there will be blood.

Comparing song lengths to some of the previous albums, there are still some long lengths on this album, but none reach over the seven-minute mark here. The longest track "BTK" clocks in at just under seven minutes. "Salt The Wound" pulls back in speed and heads into mid-tempo territory, and of course contains the guest solo everyone's been talking about by Kirk Hammett. Now regardless of whether you love or hate Metallica, Kirk's solo on here may sound like he hasn't stepped out of his comfort zone, but it's definitely the type of solo that Metallica fans from the days of the first four records and thrash fans in general have been waiting for.

For the first half of the second half of the album, the band explores their melodic side. The intro to "BTK" contains a Testament flavour where the riff is reminiscent of "Into The Pit". It almost seems coincidental because Chuck Billy provides guest vocals on the track. The quick bursts of melodicism with the harmonized licks on "Wrapped In The Arms Of Rage" are exceptionally beautiful and so tasty. The melodicism continues on "My Last Nerve" where the throttle is pulled back some more to a slower groove throughout the track, giving the listener a chance to recharge after the initial assault. Speed resumes in the final three tracks: "Numb", "Honor Killings" and "Food For The Worms", with the latter containing one of the fastest tempos to come from Exodus.

I know I've said this before, but it's hard for a band to make an album that's 100% gems and no throw-away tracks, especially when you've got a number of albums under your belt and sticking to one formula, but that's not the case with Exodus. For me, the 4-year gap between Exhibit B and Blood In, Blood Out was more than worth it, and I'm sure fans will be thinking the same when they hear the album. Gary Holt and Lee Altus unleash riffs and solos of incredible monstrosity and potency. Tom Hunting's drum performance and chops are as impressive as ever. Jack Gibson's bass tones are loud and gritty, adding to the crushing guitar tone. Of course, what else can be said about Zetro. The man is simply ageless. He just turned 50 this year and he sounds more aggressive now than he did on Fabulous Disaster.

I must say this though. I was first bummed when I learned that Exodus parted ways with Rob Dukes because I am a big Rob Dukes fan and his vocals are what got me hooked on Exodus in the first place, then I went back and discovered the Zetro and Paul Baloff material, but Zetro is also one of my favourite vocalists ever, so I'm really stoked that he's back with Exodus, and also continuing with his other band Hatriot. I'm also glad that Rob will continue with his other band Generation Kill, so Rob Dukes fans have nothing to worry about. There is a plethora of memorability and catchiness to be found on Blood In, Blood Out, which is king for any band, and the songwriting is nothing short of stellar. Look out because the Bay Area's reigning kings of thrash are back with a fucking VENGEANCE!!!!!!