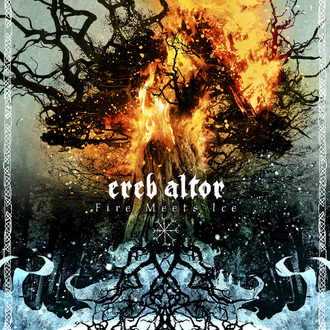 
Follow the link below for more info, or links to purchase Fire Meets Ice album:
www.metalblade.com/erebaltor/ 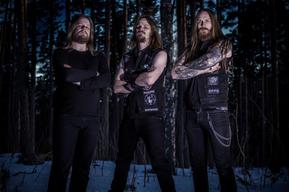 Ereb Altor: the name is taken from the lore of Swedish role-playing game

”Drakar och Demoner” (Ereb being the continent on which much of the action takes place, and Altor the planet containing said continent), and the band is a three-piece consisting of Tord, Mats & Ragnar. Mats & Ragnar are founding members of Swedish doom group Isole, and formed Ereb Altor in 2003, adding Tord on drums in 2012.When you read their biography it seems that this trio is very heavy into Bathory worship, but their homage extends beyond the mere and flattering, forming a very solid, epic sound that is quite theirs. When their latest release “Fire Meets Ice” begins, it’s with a beatific piano line and a soothing guitar melody, as if to suggest disparate elements beginning to converge. But when the heavy riffs and anthemic vocals lead the verse, there is no more of the conventionally gorgeous; rather, the grim rasp holds sway and the band’s stellar, black songcraft emerges. The concepts of fire and ice really begin to take hold with the track “The Chosen Ones”, in my mind. Lock groove mixes seamlessly into black metal paces, and from these black depths comes stirring vocal melody.

With “Nifelheim”, it’s a proper, Viking war ballad and a true evocation of the ancient Norse warring spirit:

Those words stood out most to me, as they’re sung cleanly (with blackened intonations for back-ups) and are quite simple, yet powerful. Throughout the album, Ereb Altor alternates between slower, ballad-style compositions and dark, heavy matter; the cues to headbang are as clear as the vocals that can be found throughout this work. They have created a great sense of balance between the sublime and the raw, here, with many songs steeped in the religious traditions of the Nordic people: these odes to Oden are forged in the fires of will and refined to outstanding effect through the entire record.

Perhaps the blackest-sounding piece of music on Fire Meets Ice is “Post Ragnarok”, and of course the subject matter concerns the apocalypse and the shattered earth left in its wake. Personally, I’d love to hear more from Ereb Altor in this vein, but their forays into the melodic are enticing and satisfying, too. The concluding song, “Our Legacy”, is a very fitting ballad that suggests the band has uncompromising pride in their heritage. The lyrics are as follows:


Behold our land, our land of the North
Our legacy to keep untouched
The lakes are so clear
The forests, our dark forests
A nocturnal beauty that takes the breath away
The silence cries
The winter, the absence of the sun
Fires burning bright through our darkest nights
Fires burning bright within our hearts

Ereb Altor writes epic-sounding black metal with an ease that is uncanny.

There is so much power in this record Fire And Ice; how much moreso when you consider that only three persons are responsible for creating it all! A great, solid release from this creative crew of Swedish doomed and blackened wizards Ereb Altor.