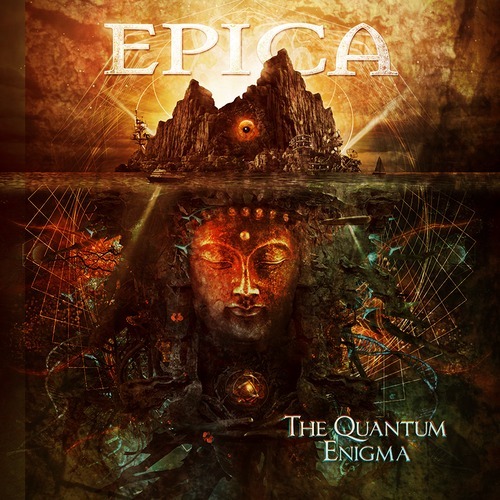 On May 2, 2014 Epica released their sixth studio album The Quantum Engima, marking a milestone for the female-fronted Dutch band. Stepping away from the powerful and epic darkness of the 2009 Design Your Universe and the progressive 2012 Requiem for the Indifferent, Epica has yet again changed their sound while keeping everything you want to expect from their songs. This album is the first collaboration between Epica and mixer Jacob Hansen, who worked previously with Volbeat, Hatesphere and Amaranthe. Hansen gave the album a more raw feeling that leaves the tracks sounding different from any other Epica album.

Seeing as how this is something the band aims for, I believe the collaboration was a definite win. It seems that vocalist Simone Simons has gotten into the habit of experimenting with her voice on each album, adding a different twist that inevitably changed the sound of the tracks. The
Quantum Enigma brings us contemporary vocals that tend to lean into higher ranges. Tracks like the first single off the album “The Essence of Silence” and “Omen - The Ghoulish Malady” are mostly consistent of higher tones with the added power of operatic vocals on a higher register.

Though, being a fan of Within Temptation, I don’t mind high pitched vocals, but Simons’ high notes can get a bit squeaky. “Unchain Utopia,” the second single of the album, has that squeak that can be both endearing and annoying. High pitched squeak aside, I simply can’t wait to see Epica perform these songs live so I can see a crowd of metal heads aim for those high notes.

The epic symphonic sound that first made us fall in love with Epica is still around in tracks like “The Second Stone” and “Victim of Contingency.” The power-packed operatic choirs and growls put Simons’ vocals in the back seat so we can enjoy the melodic arrangements and raw power of shredding guitars, strong drums and the bass you can never beat. Simons transitions between contemporary and operatic vocals smoothly and powerfully depending on where the track is taking you, adding the perfect touch. Mark Janen and Simone Simons have created lyrical content that is both elequent and Epica worthy, sticking to the main theme of the album: the theory that our physical environment is directly influenced by our consciousness turning the album into ”an exploration of the subconscious mind,” according to Simons.

In The Quantum Enigma, we get the must-have Epica ballad in “Canvas Of Life.” Beautiful melodic arrangements paired with guitar riffs that mimic the symphonic melodies. Beautiful vocals that keep in with the high pitched theme of the album, but move into soulful low singing that simply draws you in the song. The instrumental interlude “The Fifth Guardian” is also a must have, but the Asian elements that turn into folk arrangements are not found in the rest of the album and thus seem a bit random.

My absolute favourites are “Chemical Insomnia” even though I thought it was a cover of “The Hall of the Mountain King” for the first few bars. “Chemical Insomnia” is an edgy song with contemporary vocals, epic choirs and emotion packed choruses. “Natural Corruption” is also one of my top picks off this album. “Natural Corruption” adds a touch of double kick for bad-assery and melodic arrangements paired with guitar solos that leave you smiling. All in all, an album I will listen to time and time again, singing along to every song no matter how high pitched the vocals are.
Metal Master Kingdom's Album/Song review & Photo Request submission form here. ​​