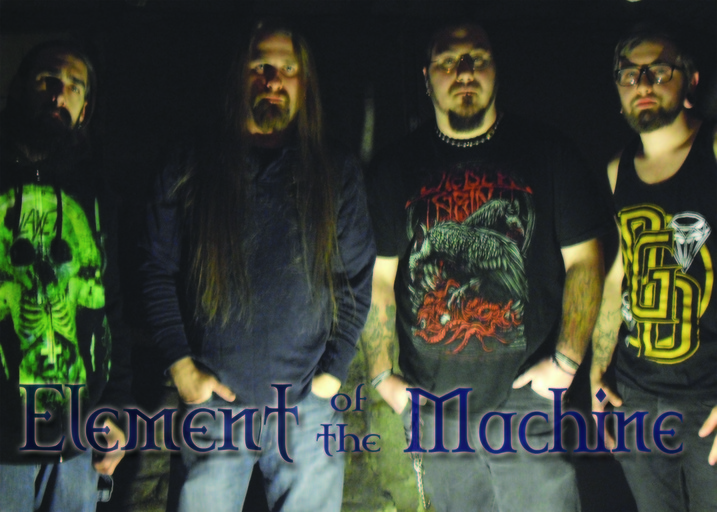 Review of  "Ghosts of the Highlands"

Element of the Machine

As with so many metal bands today, Element of the Machine formed out of the ashes of two other local bands 4 years ago. Soon after forming this New England metal super group, the band recorded it’s first CD, “Our Last Hope,” which succeeded in getting them signed to United Kingdom-based label Deka Records in 2009.

After playing numerous shows and festivals, the band has honed their skills and refined their sound into a brutal, not-to-be-reckoned-with force. Blending American and Swedish metal, they recorded this follow-up effort, Ghosts of the Highlands.

Ghosts opens with “Say it to My Face”, a straight, no-chaser metal hit with thick, chunky riffs and Phil Anselmo-esque vocals. (Considering the guys list Pantera as one of their main influences, this comes as no surprise). “They Will Rise” is up next, showcasing Bixby’s double-kick talents and a wicked breakdown reminiscent of Metalocalypse’s Dethklok  (not sure if the guys are fans, but I mean that as a high compliment). “Domination of Fear” slows the pace a bit (but not the intensity, which ebbs with the rising and falling tempo), and features some expertly executed Zakk Wydle-styled overtones.

The album really hits it’s stride at the half way point however (all of my favourite songs from the album arestraight in a row), starting with “The Haunting of Me”,  which has arguably the catchiest guitar riff on the album. Mack’s vocals have that magical clean-to-rough-ratio here that is the stuff of legends, and the guitar solo is of the blistering, brain-melting ilk that would make Dimebag proud.

“Death Without Dignity” crushes through next, kicking up the groove quotient a full notch with change-ups that had me bobbing my head (and wishing for a pit) with every listen.

The guys shake it up once again with “Weeping Hours”, another slower (but heavy) jam with a parallel melody between vocals and guitars. The chorus here is a highlight for me personally, this track stayed on repeat more times than I will admit!

“Psychotic Empathy” features yet another wicked chorus, with more overtones and bad-ass Soilwork-style guitars. The pace and intensity is maintained for the duration of the album with

“Ghosts of the Highlands” is a haunting, grinding song that alternates between dragging the listener down into the sonic depths and then hurdling them back to the surface for more.
The perfect closer to a tight, well-produced album.

Chris, Mike, Jeff and the Dereks clearly know what they want to sound like and aren’t interested in playing all over the sub-genre metal map in an attempt to appeal to anyone and everyone.
This is a well-established band that has worked out the kinks and are ready to destroy your ear drums.

If you were a fan of 90’s metal (before Nu Metal came in and influenced everything), then I urge you to check out Element of the Machine. There’s no gimmicks here, just pure, clean (as much as metal can be anyways) un-adulterated, progressive-without-the-pretension-metal.
There’s new material on the horizon from these guys, and I’ll be keeping an eye out (and horns up) for Element of the Machine in the near future.