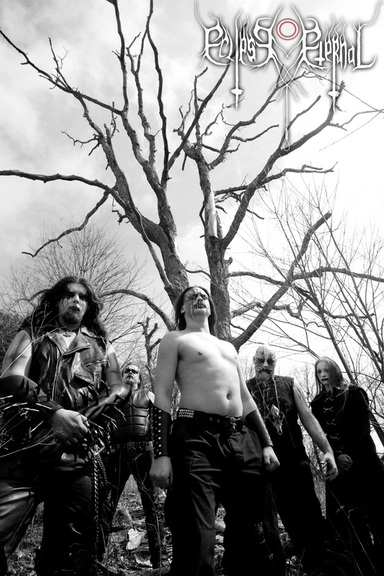 Veterans of the Canadian Black Metal scene are back with their most recent effort “The Essence of Hopelessness”. Formed in 1999 the band released their first effort “Reign of the Unholy Blackened Empire” in 2004 on Galy Records. The goal was to create symphonic black metal songs, and with the help of King Diamonds Andy Laroque and Glen Drover on the production, they did just that.

The following years Eclipse Eternal spent their time on the road playing alongside some of black metal’s biggest names such as: Mayhem, Satyricon, Immortal, Watain, Dark Funeral, and Enslaved to name a few. During that time they also have gone back to the studio and gone to work on their current release “The Essence of Hopelessness” set to be released in January 2012 through Archaic North Entertainment.

Being that Eclipse Eternal is a musical symphony “Deathbound” is just that. Immediately the song starts with a nice drum introduction, followed by a smooth melodic minor speed riff. The melodic harmonies throughout the song are accompanied by some very heavy breakdowns, and beautifully written centerpiece complete with strings.

If the original intent was to create musical symphonies, then I would have to say that “Deathbound” is one of them. I could envision a major symphony taking this song and playing it at an opera. Overall I like what Eclipse Eternal has done with this song and want to hear more. I rate this one 9 out 10 stars!!! Beautifully produced well written, and it had me engaged throughout the song.