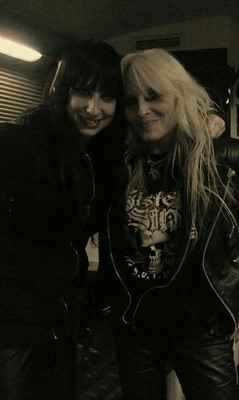 Saturday, February 9th in Columbus, Ohio proved to be a hard hitting night for female fronted metal acts. The legendary Doro Pesch was headlining her North American tour, while the quickly rising “Sister Sin” proved to be a great opening act worthy of a headlining tour as well. The show was held at Ace of Cups, a small yet comfortable venue with a great atmosphere. The only complaint I have about this venue is that the stage was very low to the ground, which made it hard to see the musicians unless you were very close to the stage. Doro herself even addressed this at one point at the beginning of her set. On the plus side, those who were in the very front of the crowd had a great, up close and personal view of the musicians. Aside from the venue’s small size, I have no other complaints about the atmosphere, which was very friendly and easy going compared to some of the stricter venues I have been to recently.

Sister Sin, whom I have been familiar with since 2008, possess a streetwise, party hard sound and image reminiscent of Hair Metal acts along the lines of Motley Crue, Twisted Sister and Skid Row, mixed with the ruggedness of other classic Metal acts including Accept and Motorhead. Unlike several modern bands who attem
pt to play eighties metal, but lose themselves in current trends, Sister Sin have an authentic old school sound. Their music is truly unique in today’s metal scene and it is punctuated by their very beautiful vocalist Liv Jagrell. During their set, Sister Sin played approximately ten songs, highlighting songs from their albums “Switchblade Serenades,” “True Sound of the Underground” and their most recent album “Now & Forever.” I overheard some very positive word of mouth in the crowd, a good indication that this tour gained the band many new fans.  Their high energy set turned me onto many of their newer songs and has prompted me to seek out their two most recent albums, which have proven to be just as great as “Switchblade Serenade,” the album that first introduced me to the band upon release. I also met a few of the band members, Liv Jagrell, Jimmy Hiltula and Dave Sundberg, all of whom were very friendly and courteous to their fans, which made the night even more pleasant.

This was my first time seeing Sister Sin or Doro live and their show definitely lived up to my already high expectations. Doro played many songs from her Warlock era and solo career, including recent songs from her latest album “Raise Your Fist.” Her love of and dedication to her fans was highly evident as she praised everyone at the show, made an effort to interact with her fans, and even hung out after her set to sign autographs and take photos with a mass of avid fans, all in spite of a sinus infection she apparently had. This illness never affected her vocals, which were in top shape through her entire set. Unfortunately, a few days after the show, Doro was ordered by her doctor to give her voice a rest, which forced her to cancel one of her shows in Michigan. While many fans were undoubtedly disappointed by the circumstance, her positive attitude paid off on her Facebook page as people expressed much love and support of her in spite of this downturn. Musicians who are grateful of their fans and treat them exceptionally well are not only pleasant to meet, but also deserve strong support as well. For this reason, the show had a very positive atmosphere that was refreshing, and this attitude seems to punctuate Doro’s fanbase as a whole.

As for her songs, Doro covered some of her iconic tracks such as “Burning the Witches,” “All We Are,” “Metal Tango” and the recent “Raise Your Fist.” She took the time to pay tribute to some of her influences by covering Judas Priest’s “Breaking the Law” in her style, prompting audience participation. Doro also expressed her love and respect for Dio, who was undoubtedly a huge influence on her vocal style, as she sang a heartfelt tribute to him. Doro and her band members displayed much energy through the show while playing at a satisfying length. After the show I briefly met Doro at her merchandise stand. She turned out to be just as sweet in person as she presents herself on stage, and she is just as beautiful today as she was in the eighties. I had wanted to meet Doro for years, along with the Sister Sin band members, and am glad that I was able to spend some time with them at this show. While the overcrowding and lack of stage height was problematic for many fans including myself, the intimate setting allowed us to engage with the band members in a way that larger venues often prohibit, making this one of the most entertaining and satisfying shows I have ever been to.

For anyone who is into Doro’s style and also enjoys the grittier side of Hair Metal, I strongly recommend Sister Sin. Be sure to catch them live as soon as possible. And for any of you who are unfamiliar with Doro, do yourself a favor and catch up on her music as well. Doro’s songs are as metallic and heavy as many of the legendary male fronted bands she was influenced by, though she never shies away from variety and diversity through slower, heartfelt songs that never feel cheesy or forced. I hate to admit that I only discovered Doro as recently as 2010, but I never looked back as she has quickly become one of my favorite female vocalists. Doro has maintained a very active tour schedule throughout her career, one that hasn’t slowed down as of yet. Because of this, I strongly encourage all Metalheads to see her live immediately. You will not regret it.