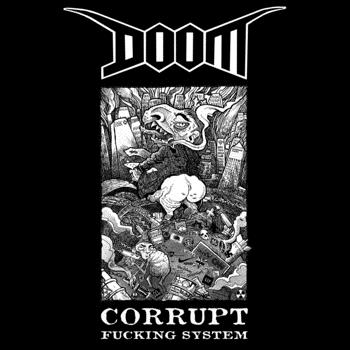 DOOM formed back in 1987 with their own crust sound in the punk movement, dawning themselves as UK Crust Pioneers. After more than 25 years of Crust, on December 23, 2013, they released their 8th full length album, “Corrupt Fucking System”.

With 14 tracks and tons of messages both hidden and not, DOOM never ceases to amaze both fans and non-alike. Starting off with “Stripped, Whipped and Crucified”, I feel reminded of their previous EP “Police Bastard” in the instrumentals.

Even the cover of Corrupt Fucking System shows how much they hate capitalism, fascism, and everything related to human control, which is a very common topic found in metal lyrics.  The cover speaks for itself, portraying the greed of the rich and the system that leeches off societies worldwide.

“Prey For Our Souls” continues on from their first track, starting off with a word about prosecution, furthering about children exploitation, the protection of paedophile priests, and the horrors of religion and worship.

The third track, “Human Meat” follows right after. “You’re next on the menu”. We are no different from what we eat. “Another animal slaughtered for you, speciesism is hard to chew.”

Every track contains the sad truth, but a beautiful melody. DOOM knows how to sum things up with simplicity, no sugar coating involved. Animal rights, crust, fighting the system, and pure heavy metal is what DOOM is all about, never changing their image or lyricism for anyone to please.

My overall favourite tracks are: “Eat Shit & Buy”, with its emphasis on Commercialism and the results of packaging, toxic fumes, and the planet’s destruction as a result, and “Corrupt Fucking System”, which speaks for itself.
Metal Master Kingdom's Album/Song review & Photo Request submission form here. ​​