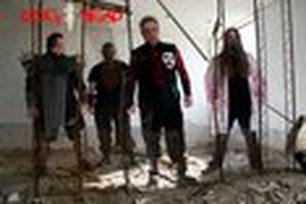 DOG HEAD is an industrial metal band whose intention started simply. It was to create powerful music that ignites angst and makes you want to pump your fist in the air! DOG HEAD has become known for their outrageous shows. Accompanying DOG HEAD on stage are actual animal skulls, a piñata in the image of the Earth filled with candy and condoms and is broken over the crowd. They have various other indescribable props and theatrics, and a jack-o-lantern that ends up smashed on stage. DOG HEAD now has their most intense band lineup ever. Thanks to new front man, Jason Lodge m and lead guitarist Chris Lodge. The band is writing and recording new music while engaging in online promotions and booking gigs! This band bio can be seen and read on their fb page, take a look for yourself.

I listened to to the song Reality, and the first thing that came to my mind was , “this is industrial metal?” Then the song went further than that.

I checked out some more song. Anthem of the Freaks starts out with a funky bass, and then some chanting vocals, and the anger is right there. I shook my head from side to side, not because I was saying no to the song, but because I was saying yes to the message. Then I moved along to the tune Fall of the Proud. I stopped there and listened it over and over again. Fall of the Proud did it for me. “I don’t want to be like me!” Did I get the words right? Because that is what I got from it all. Forgive me if my old ears didn’t catch it right. “The Human Race is Self-Centered”. That message was very clear!