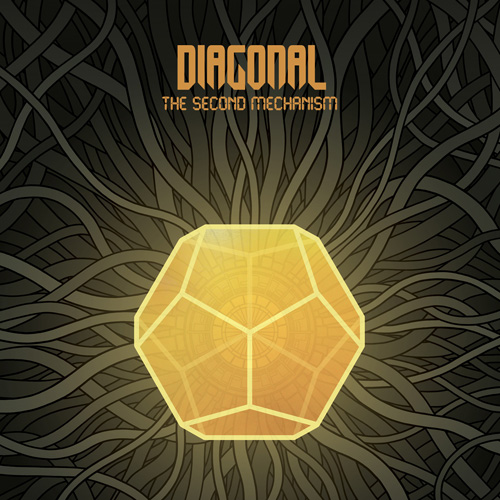 The Second Mechanism, by Diagonal, is a controlled, cold-sounding experiment in the new progressive from the United Kingdom.
This, their second major album, was released on the Metal Blade record label, and is a follow-up to 2008's release on Rise Above.
Seeming to pattern themselves after progressive masters of the past, they further the sound concept in to the modern day with this calculating release. There is no trace of the ironic and obvious in their homage, but there is, rather in abundance, a dynamic sense of the effortlessly earnest to be found throughout.

It is a tense and transitory piece entitled "Voyage / Paralysis" that begins The Second Mechanism. With synthesized
sounds meant perhaps to recall science fiction movie soundtracks, the bass carries a low menace and dread reminiscent of Magma's  "De Futura" in the introduction. The music is airy for a time with a powerful composition for the horn section, leading down darker paths and  later reclaiming the introductory theme.

"These Yellow Sands" begins with chilly, epic-sounding jazz-rock and metamporphs into a finely paced rocker with shades
of an Arabic sound. The music in this piece is fluid without sounding overwrought.

The problem, at least for me, begins at "Mitochondria", the album's third track. The introduction is another exercise in a methodical, slow style the band seems very much to enjoy, but one is reminded only of the previous track's beginnings. It is a minor lull and purely filler, but fortunately the opener segues quickly into a great piece of well-composed, retro-psychedelia.

In "Hulks" do we hear the lead vocals present themselves in unison with haunting, back-up harmonies.
It is here that one begins to realize the potential in Diagonal as a fully melodic group of players, capable of quite a lot in terms of what feelings they may engender in a person through their music, but we see also the hand of control at work in the measured use of vocalization. This grip on the music is loosened slightly towards the end of the piece through several chaotic forms, and after ten and a half minutes, the song winds quietly down.

"Capsizing", the final track, has more of a free-form feel in the horn section and bass stylings
while simultaneously engaging one in dual synthesizer and guitar soloing, precise jazz drumming and a return to the tension and pressure of the album's opener. The Second Mechanism closes with much the same, synthesized sound that introduces it, but this bookend style of atmospherics could be quite a bit more effective if there were something more substantial at work than just a brief interlude of simple noises.

In all, what Diagonal has created here is a very enjoyable throwback album that will entice fans of their progressive predecessors while  at the same time giving incentive to listeners who may not be as familiar with the genre.