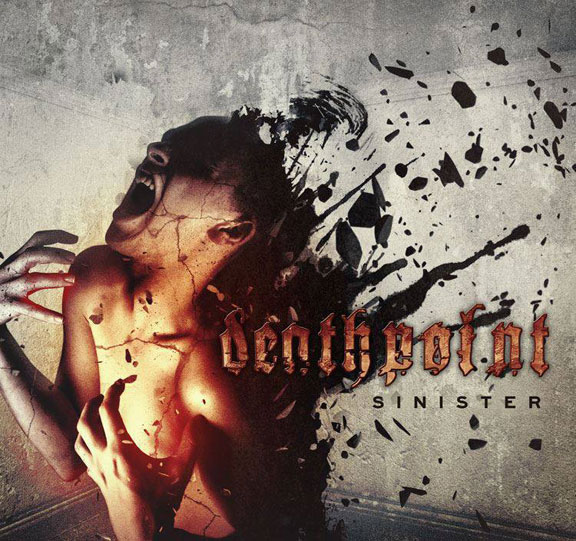 Sinister track list:
1. For Your Eyes Only
2. Between the Lines
3. Sinister
4. Sick, Sick, Sick
5. Remission
6. Entitled to Nothing
7. Condemned to Suffer
8. Lost Haven
9. Thirty Stitches

Releasing their sophomore album Sinister is Ontario, Canada’s Deathpoint. Out now, as of  October 1st, 2013 on Spread the Metal Records label. I was unfamiliar with Deathpoint until this point, so I was not sure of what to expect when I hit play for the first time. Instantly the incredible dual guitar work of Tim Ross, and Henry Joldersma stands right out, then you hear Tom Emmans on vocals and his growl is outstanding. Throughout the album you have killer drum beats, and some very nicely done melodies. Don’t let the first few tracks deceive you because by the time the album is over you are completely infused with some kick ass tunes.

When you hit tracks like “Condemned To Suffer” and “Entitled to Nothing” you are sucked in by the power of Deathpoint. Those two tracks were the major highlight for me on Sinister. They were done to perfection, from the growls to the blasting drum beats, every aspect of these songs definitely had my head banging. The track layout after hearing the whole thing couldn’t have been done any better. The way it was set up was like a build-up of anticipation, starting out with the mellower of the songs, and at the end you have tracks that are grabbing a hold of you, then bam you are at "Thirty Stitches", a perfect way to end the album. They take it down a notch, and leave you with a beautifully done song, and a little extra. There are so many highlights on Sinister it is hard to pin-point any one thing that Deathpoint do because as a band they have an amazing connection that flows with each member.

Any metalcore fan would love Sinister while being able to reach the fan base of people that enjoy the heavier side of metal, while they might skip a few tracks due to the clean vocals. Great job guys! Keep up the good work, look forward to what you guys have for us next.
Photos courtesy of Navneet Johal from Spread the Metal Festival in Toronto on September 7, 2013 at The Opera House,
(show review can be viewed here).