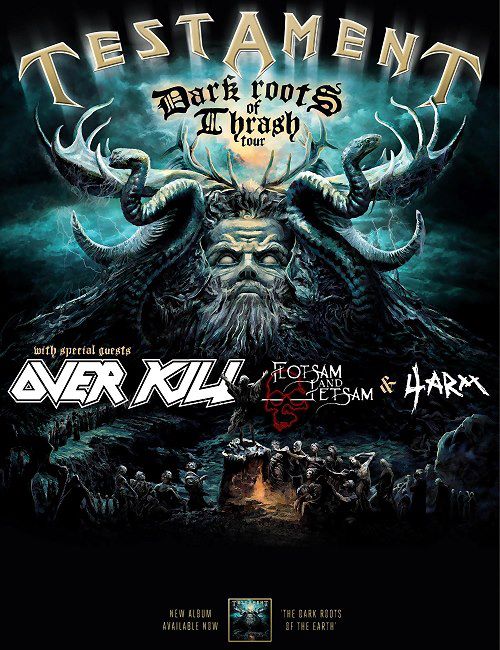 Ever since the release of their highly successful new studio album Dark Roots Of Earth, Testament have been criss-crossing the world on an adventurous tour. Their first tour of 2013 was a North American headline tour dubbed the Dark Roots Of Thrash tour, featuring support from New Jersey thrash legends Overkill, Arizona thrash legends Flotsam & Jetsam, and Australian thrash newcomers 4Arm. Toronto was the only Canadian stop on the tour, and Toronto metalheads were all very happy that it hit our city. Although, I wish that there were more stops in Canada for this tour because this is a bill that thrashers all across the country would love to see, both young and old.

The show took place on Monday, February 18, 2013, which was also Family Day. I went to the show with my friends Dan and Caroline, we arrived at the Phoenix, with the doors open at 7:00. 4Arm was the first band up, and they were by far the best opening band. The band opened their set with “While I Lay Awake”off their latest album Submission For Liberty.

The downside about the tour is that Overkill had to pull out of the remaining shows due to front man Bobby "Blitz" Ellsworth being diagnosed with pneumonia. It became a huge bummer to the fans and the band, but we all wish Bobby a speedy recovery in time for when the band gets back on the road in Europe in the spring.

As a result, Flotsam & Jetsam played an extended set, where they opened their set with the title track off their upcoming studio album Ugly Noise, and they closed their set with their big anthem “No Place for Disgrace”. I was talking to F&J’s vocalist Eric Knutson after the show, and they said that they haven't been to Canada in over 20 years.

After Flotsam & Jetsam finished their set was the moment we've all be waiting for; Testament takes the stage! The intro song was the American national anthem, and the band started their set with “Rise Up” from the album Dark Roots of Earth.

“Rise Up” was the perfect opening song due to the levels of intensity the song contains and Chuck Billy's commanding lyrics. The band's set consisted of mostly classics such as “Into the Pit”, “Over the Wall”, “The New Order”, “The Haunting”, “Trial by Fire”, and “Practice What you Preach” as well as four tracks from the Gathering album such as “D.N.R.”, “3 days”, “In Darkness”, “Eyes of Wrath”, and “Riding The Snake”.. For anyone who purchased a VIP package was also entered in a raffle to win a signed guitar by Eric Peterson, and a chance to sing background vocals on Into The Pit. The band brought up two lucky girls to sing with them. Girls singing with Testament is something you don't see every day. The band played only 12 songs, but for good reasoning. After they played Toronto, the band will have played 7 one-nighters in a row.

This was my fourth time seeing Testament. The first time I saw Testament was in 2010 on the Canadian Carnage tour with Slayer and Megadeth. The second time was at the first edition of Heavy T.O in 2011, and the last time I saw them was in September 2012 on their co-headline tour with Anthrax, with Death Angel as special guests. Once again, Testament have pleased Toronto as they always do, but I still think they were slightly better when I saw them with Anthrax. I look forward to seeing Testament when they hit Toronto next. I recommend everybody see Testament because they put on an amazing live show and they put a lot of other club bands' shows to shame.