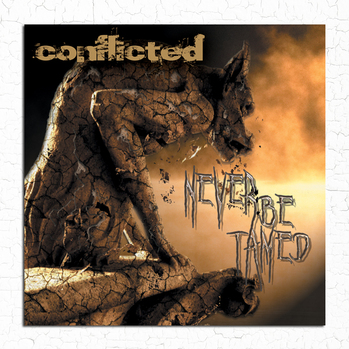 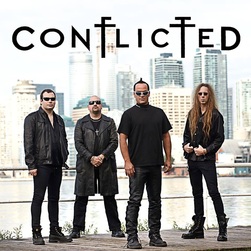 Current line up and photo from 2014,
Never Be Tamed album track titles:
After Too Long
Victor(ia)
Fallen
The Hand of God
Stay
Heat me Up
I wish I Remember
Alive
Torment
Release

“After Too Long” is the gateway song of the album and leads to the brilliantly written and performed song “Victor(ia)”. A song that clearly speaks of homophobic misgivings and pain for those who deal with many misconceptions of gay life. Without depicting each song, I want to stress the emotional and diverse lyrical content that justifies why Conflicted can Never Be Tamed.

Keyboards play a major role throughout this album which gives the album a richer sound. Drums and bass keep the head banging in time with the fast moving songs.

Mesmerizing notes emanate from Mark Owens' guitar. He has the art of string manipulation down to a tee. Mark pulls no punches. His guitar notes literally chill my spine. He reaches in, wraps those notes around my spine, and electrifies me from head to toe. What a fucking rush.

Superior vocal skills from Conflicted's front man Jason Orton is nothing short of superb. As the album's credit and band information page states “What you hear is real. No vocal harmonizers or pitch shifting was used during this recording” . As soon as Jason releases the first ecstatic note from his highly trained vocals, one is propelled into the Orton realm. With incredibly captivating and powerful vocal ranges, and note sustainment, Jason propels the listener directly into the song with full force.

It is my opinion that Conflicted have been overlooked by many in the music industry. Once you become aware of this band's massive talents, you too will believe in Conflicted. I do believe in them, and I want to see Conflicted take the Canadian music scene to a new level.

Be sure to keep your eyes peeled for their upcoming album release In The Water.

Low points: some adjusting of the overall album sound could be improved otherwise well orchestrated.