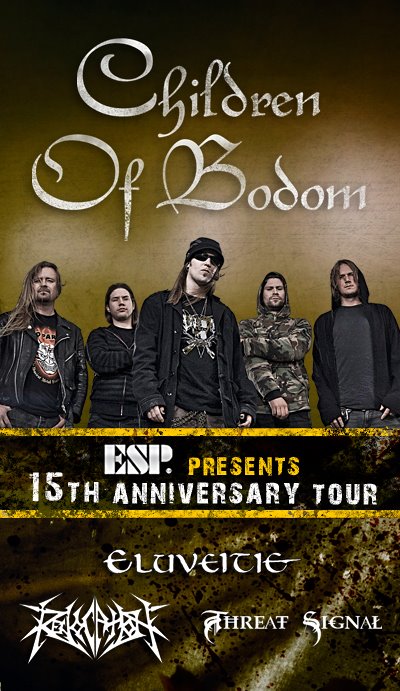 Children of Bodom + Other Bands

Hey everybody Chris here with my first concert review for Metal Master Kingdom. This is a concert I’ve been looking forward to for quite some time; I went to see Children Of Bodom, Eluveitie, Revocation, and Threat Signal at the Sound Academy last weekend. This was Children Of Bodom’s 15thAnniversary Tour and my second time seeing them, I was blown away by their performance there and with the other bands that were opening I knew this was going to be a good concert.

The first band up was Threat Signal (death metal) from Hamilton, Ontario. I hadn’t heard of this band before until the announcement of the tour so from the few songs I checked out by them on youtube I was pretty excited to see them perform. They were really tight live, technical rhythms/riffs plus their guitarist kicked some serious ass. They really got the crowd pumped and started the first few pits of the night.
Here is what they played:
Trust In None
Fallen Disciples
A New Beginning
Through My Eyes
Face The Day
Comatose


The second band up was Revocation (death/thrash metal) from Boston, Massachusetts. I checked out their latest album Chaos Of Forms and was just floored with the talent in this band so I was really pumped to see them live. They had such a great vibe as a band altogether and really knew how to engage the audience and get everybody pumped and get some pretty bitching pits going.

Their lead singer (Dave Davidson) was also hilarious, at one point between their songs he is a comedian of a frontman, he made a couple of the security guards laugh with his quote of "It's like Skyrim, only the dragons have tits" and he said "this next song is about conjuring up a bunch of ancient demons, and the chick demons get to have sex with you. Do I hear any chick demons? *Cue the female fans screaming* I said chick demons, not dude demons", to which the security guards were laughing again.
I had a lot of fun in the pit with this band, can’t wait to see them again.
Here is what they played:
Harlot
Age Of Iniquity
Dismantle The Dictator
Across Forests & Fjords
Conjuring The Cataclysm
No Funeral

Next up was Eluveitie (folk metal). I’ve been listening to them for a few years now, and I have always been impressed with their work. It was also my first time seeing a folk metal band at a concert so I wasn’t entirely certain of what to expect. HOLY. F*CKING. SHIT. They really knew how to get the place moving, the pit was brutal as hell, their singer also talked a lot to the audience and the rest of the band instrumentally was amazing.
Here is what they played:
Everything Remains As It Never Was
Nil
Kingdom Come Undone
Havoc
A Rose For Epona
Meet The Enemy
(Do)Minion
Quoth The Raven
Inis Mona


And finally there was Alexi Laiho and the rest of Children Of Bodom (melodic death metal). These guys are one of my favourite bands and I was looking forward to seeing them all night. Man, they know how to put on a show. The entire floor was turned into a pit the moment they stepped on stage. I always told people that Bodom pits are pretty crazy and man they proved me right. Alexi really knew how to keep the crowd entertained between pumping them up and banter with other band members, outstanding show.
Here is what they played:
Sixpounder
Are You Dead Yet?
Silent Night, Bodom Night
Kissing The Shadows
Shovel Knockout
Living Dead Beat
Everytime I Die
Deadnight Warrior
Hate Me!
Blooddrunk
Angels Don't Kill
In Your Face
Lake Bodom
Hate Crew Deathroll