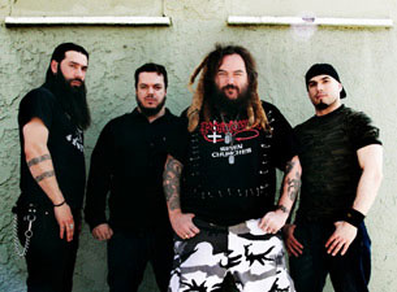 With Baptized in Blood

This was a night of anticipation; seeing Max and Igor Jr, was like a dream come true!  We had not been to this venue before, and we were mildly surprised at the small size of the premises.   We got settled into a slightly elevated vantage point where we had no obstruction whatsoever, and this also proved to be the best spot to watch the floor area. The merch table was selling its wares like hotcakes, the bar was busy selling drinks, and the crowd was slowly filtering in while Baptized in Blood shared their raw and ear crashing tunes. They were just as excited to be there with Cavalera Conspiracy as we were.  A call to raise the horns, as homage to the brothers and their band, had been called upon us numerous times. After warming up our eardrums for the main event, B.I.B. cleared their equipment off the stage and we noticed a steady stream of bangers were now entering the club.

The anticipation of the METAL heads gathering for the upcoming show was charging the airwaves.The crowd was inching closer to the stage and packing in tighter. Then finally Cavalera Conspiracy came charging on stage, ripping guitar chords, and kick ass drum beats pounding to pierce our eardrums. Heads were banging, many fists and horns were held high.  We were about to be taken by storm and wanted it to happen.

Max and Cavalera Conspiracy went on to perform, and pierce our eardrum with the tunes Sanctuary, Inflikted, Killing Inside, Resist Refuse, I Speak Hate, and Genghis Khan, (and not in that particular order).  Max ordered our fists to be held in the air, and to get into the pit!!! There were many who were happy to oblige, especially bangers wanting to participate at circle moshing.  The pit grew in size with every song, and to be honest, I was glad to be observing, not being forced off my feet had I been on the floors. The entire complex shook from the ever growing pit and the amps pushing out to the max!  I had double the entertainment now!  There were many who also took part in stage diving into the crowd. Some who weren’t quick enough to dive were pushed off by the bands security and road crew staff.  The final encore song from Cavalera Conspiracy was none other than the song Roots Bloody Roots.  The frenzy of the crowd reached a climax and we were left spent from a rigorous night of METAL!!!

As we left the venue, a sense of METAL community emanated from the crowd and we were all in awe of having seen a living legend of METAL music. We all knew we had just witnessed music greatness in our hometown of Toronto. As for my husband and I, we loved the show!  When’s the next one?

We will have to wait and see.
Stay tuned, bangers.