Out on August 7th, 2015 via Metal Blade Records
Cattle Decapitation is:

As a long time fan of Cattle Decapitation, I was very curious as to which direction they would take with the new album. “Monolith of Inhumanity” is definitely a masterpiece amongst the masses and would be difficult to top. Through diversity and darkness, Cattle Decapitation has created a new breed of demon with The Anthropocene Extinction. It shows how they are evolving as a band while also keeping in touch with some classic elements from their previous albums.

Cattle Decapitation continues to deliver their grutal (gore+brutal) lyrics, heavy in your face instrumentals and the most obscure yet melodic vocals you could ever imagine. Travis Ryan has a vocal range that I've never heard in any other band or genre of metal, and that is what I think separates them from every other band striving to make it in this industry. Hearing the “We'll fucking die tonight and that's perfectly alright with me” lyric in “The Prophets of Loss” will have you chanting along instantly and feeling it in your bones. Cattle Decapitation is catchy extreme metal at its finest. How many Death Metal Progressive Grind bands do you know of that you can sing along with? Or even scream along with; if you so dare to try to match the legend that is vocalist, Travis Ryan.

The album starts off with the heavy and gruesome “Manufactured Extinct”, blowing your mind to pieces instantly. You can almost feel the flesh beginning to rip from your face and its only the first track! The pulverization continues with the next track “The Prophets of Loss” which features the voice of the almighty Philip H. Anselmo. After that, you start to feel the tone and direction of the album. “Not Suitable For Life” is probably my favorite track on the album, though. With tongue in cheek lyrics like “Fuck your system and fuck your decision” you can't help but belt out the words yourself. This song also features the classic melodic vocals that just send chills down your spine during the “How can you look me in the eyes, tell me you're proud of what you've done within this life?” verse of the song!

The concept for this album is very interesting too. It is very apocalyptic sounding and could very well be the soundtrack for the eventual fate of the human race. The sounds of the ocean washing up on the shore in the beginning of “Ave Exitium” are very eery and the deep, dark vocals also provide a good foreshadowing of the final song on the album. “Pacific Grim” features the voice of Jurgen Bartsch of Germany's Bethlehem speaking in his native tongue to add a special black element and sense of mystery to the song. This last track is even heavier than the first, making the album end leaving you Not Suitable For Life! 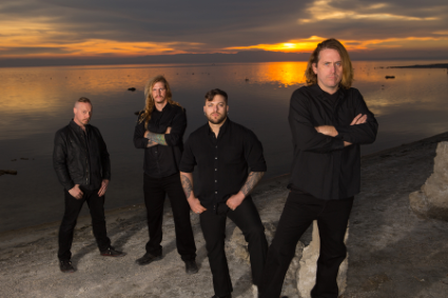