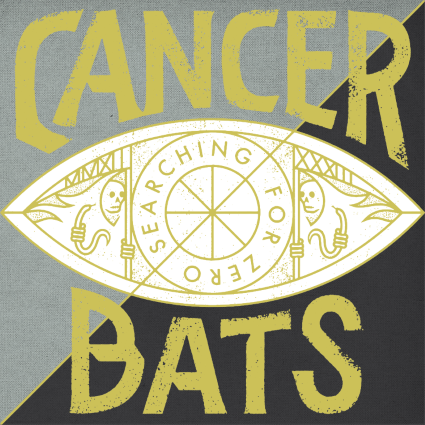 As I listen to Searching for Zero from Cancer Bats, I am intrigued by interstellar sound effects and the delicious punk/thrash energy that emanates from the album opener “Satellites”. The band members share their thoughts on the album:

"No More Bull Shit…" asserts singer Liam Cormier of Cancer Bats "That was our declaration for this whole album" he says when speaking about the bands fifth studio recording Searching For Zero. The choruses are hookier, the screams more savage, the riffs more vicious, the songs more powerful. This is the Cancer Bats at their pinnacle – their "True Zero."

"We were coming out of what was a really heavy year for all of us, with a lot of challenges, non stop touring and the deaths of people really close to the band.  Us dealing with all of that and how that's taken its toll," explains Cormier about the headspace he shared with his band mates – drummer Mike Peters, guitarist Scott Middleton, and bassist Jaye Schwarzer – surrounding the album's composition.

Cancer Bats show their respect for a fallen metal soldier, Dave Brockie of GWAR, on the song “All Hail” on this upcoming album. A very fast paced tune which reflects the fleeting moments of one's life. I predict this song will be a crowd fave when Cancer Bats hit the road on March 12th in Toronto.

Thanks to the influential producer, Ross Robinson (known for his work with Sepultura, Slipknot, At The Drive In, Glassjaw, Blood Brothers and The Cure, etc.), this album is full of raw, and hard hitting edge from the vocals, rhythm, and guitar contributions. I would rename this album True Grit because the production of the entire album is real, and not full of added fluff.

As an old school metalhead, I appreciate the edginess, mixed with elements of punk, thrash, and sludge. After all, many bands we all know and love have been influenced by some of the classic bands of yesteryear, that paved the way for future bands to evolve and perfect this energetic tour de force in the modern metal scene. With Searching for Zero, Cancer Bats bring the music fan head-banging righteousness filled with personal views of this unforgiving, and fast-paced world.

Highs: I totally identify with “Cursed with a Conscience”
Lows: Haven't found any