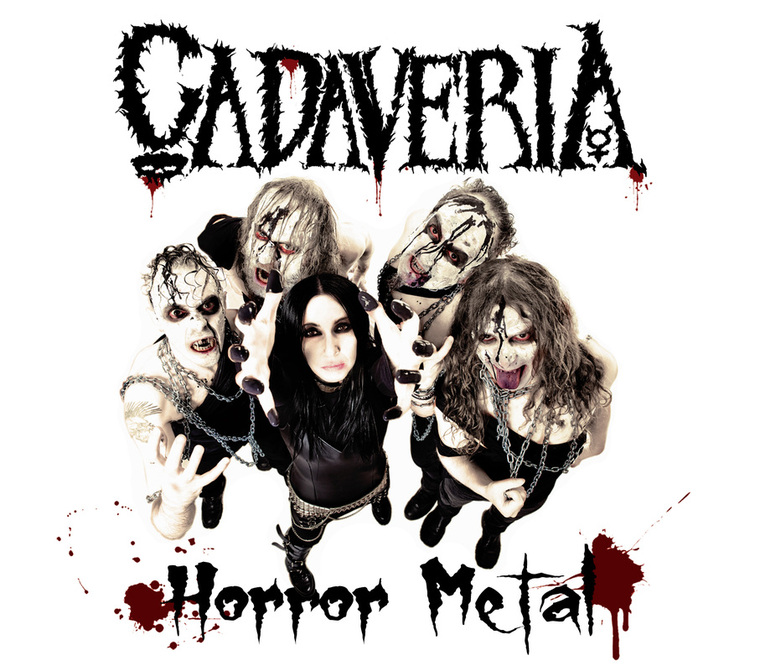 CADAVERIA was formed in 2001 by Cadaveria and Flegias (aka Marçelo Santos) with the intent to create a virtual space where they could freely express themselves as musicians and extreme artists. Then some of the most talented personalities from the Italian Metal scene (Killer Bob – aka John, ex Necrodeath, Frank Booth and Baron Harkonnen – aka LJ Dusk from DyNAbyte) were recruited and CADAVERIA hit the Metal Universe at full speed.

I usually like to tag a band in my reviews as some sort of genre or sub-genre of Metal just so readers can get an idea of what they will hear if they choose to listen to the music I’m writing about. I consider CADAVERIA’s Horror Metal to be a form of Symphonic Death Metal. Marçelo Santos remarked in my interview with Cadaveria and himself that their music moves from Doom to quick Death Metal tempos and includes, too, some Heavy Metal and Rock elements. So Horror Metal it is! It’s not so easily definable and CADAVERIA can do what they do; create extreme Metal music.

You’re not going to hear any bloodcurdling screams from tortured people, so don’t expect that. This isn’t slasher horror movie stuff; it’s got more class than that. Yeah, I can visualize the album as the soundtracks for short horror movies or a single soundtrack with plenty of danger, darkness, shadows creeping, pitfalls and stumbling into places of safe refuge for a few moments before a fiend reaches out and snatches the heroine or hero from safety and serenity. Think about Christopher Lee and his roles as Count Dracula in Hammer Films, but with more intensity.

I have a cat. She’s sleek and mostly black with a little bit of white here and there. She purrs and wraps herself around my legs. I reach down and pet her and she’s so sweet and inviting. But once I stop petting, she snarls and slashes at my legs. Her name is Queenie. I might change her name to Cadaveria or, maybe Cataveria. Listening to “Flowers in Fire” inspired these thoughts.

Yeah, I decided to listen to this album in the dark, after all, it’s titled Horror Metal and darkness always suits me for horror movies or my own nightmares. So off I journeyed. First track up is “Flowers in Fire”. The intro invoked some bad memories from something in my childhood I won’t recount, but let’s just say the twanging sound at the beginning was reminiscent of one of those mouth harps that I was hearing before something appalling happened while passing through a small town in the mountains of Tennessee. Quickly I’m no longer in my personal past but thinking now of the Hostel movies and a gravelly walk down the halls listening to the cacophony of tortures and pleasures in the distance. A bell tolls and signals I’m about to the end of this hall and I hear a hint of Cadaveria Herself’s vocals, perhaps, in the deep background and a steel door bounces shut, a scream and a gentle guitar and then I’m under the spell of Cadaveria’s sweet alto vocals and she draws me in and I relax…oh, so what’s so horror about this now? Ah, crunchy guitar and then Cadaveria’s growling vocals and relentless riffage, followed by more sweet, despondent vocals and the music builds and then releases me again into gentle guitar plucking and back to the sweet alto vocals and then……CADAVERIA increases the pitch and the fervor of the message and then wonderful lead and bass guitar highlights for a few measures until suddenly there’s the frantic drumming as Cadaveria begins the growling, throaty vocals again and then a guitar solo that reminds me of the final climax to a horror movie……and then calmness again and the sweet altos and I think the horror is over, but wait, what’s that almost hidden raspy vocal sound beneath Cadaveria’s vocals? A hint perhaps of what might be to come…….and then just a heart beating.

Okay, that was the first track. Next comes “The Night’s Theatre” and it’s more symphonic sounding and I dare say a bit epic sounding. The keyboards are a great added touch to the atmosphere. The composition is woven exquisitely and just when I get comfortable with the melody it suddenly changes and it feels so right with each change. The melody is one that will make room for itself in my head and peek out from time to time whenever I find myself walking down a dark road in the faint moonlight, hopefully not in that town I mentioned earlier. The melody and Cadaveria’s vocals are what touched my heart in this song.

Third track is “Death Vision” and it follows nicely “The Night’s Theatre” and gives me more of the constantly changing rhythms and sounds within a song that I’ve found on all the tracks on Horror Metal.

There are eight more tracks that follow and they all seem to move logically from one to the next. There was nothing disjointed at all about the album. It’s definitely a concept album and together the songs make up an entire great listen for me. There’s a sort of sameness, a similarity to the songs as the tracks progress, but listening to “Flowers in Fire” and then jumping to the final track, “Hypnotic Psychosis”, would seem awkward. “Hypnotic Psychosis” is the heaviest and fullest of the songs and the other 10 songs lead up to it quite rightly. Each song on the album had a delightful surprise for me, although now that I’ve listened to it many, many times I know what to expect and revel in those changes when they occur just as I was expecting. It’s like watching a favorite horror movie that I’ve savored over and over again and still enjoy every morsel.

CADAVERIA’s Horror Metal and the band’s previous 3 releases are probably some of the best Heavy Metal music too many people have never heard. If I had my way, CADAVERIA would be on everyone’s iPod, stereo and computer music library and performing at a favorite venue near them soon. Come on CADAVERIA! I want you here!