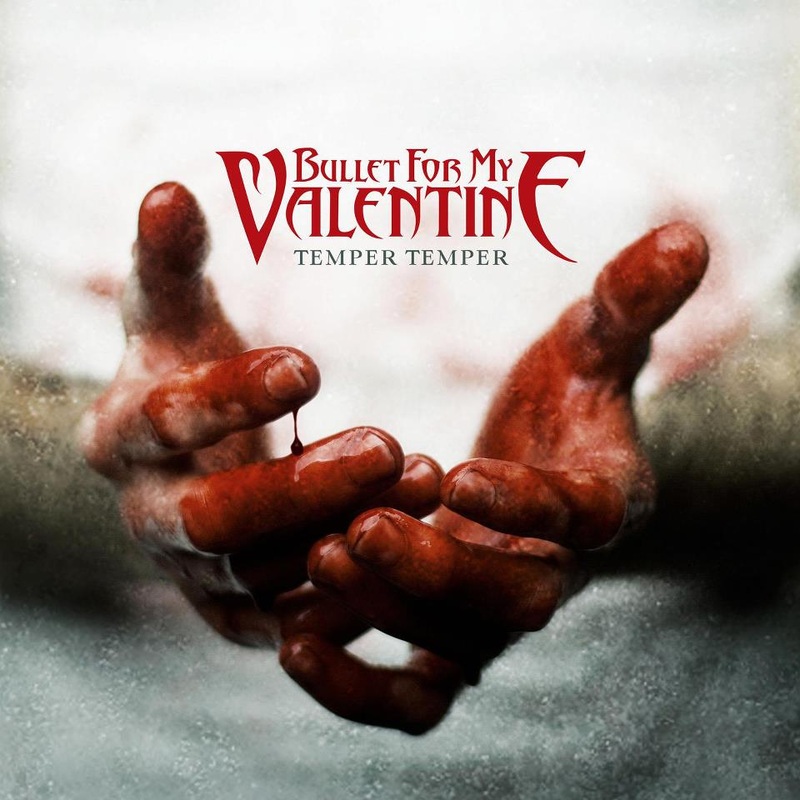 bullet for my valentine

While I may be a bigger fan of Bullet For My Valentine's music and not fond of their lyrics, they continue to produce some great musical gems. After touring for a year and a half on the Fever album, the band began writing for their 4th studio album, which was called Temper Temper. In between the writing of the fourth album, front man Matt Tuck was also recording and touring with his new side project AxeWound, who released an amazing debut album entitled Vultures. The Axewound album lets Matt bring out the aggressive side of him, which to many hardcore Bullet fans, wouldn't fit the BFMV’s usual formula.  After hearing Temper Temper, I feel that the creative spirit and juices for Bullet are draining pretty quickly. The title track put some worry into hardcore fans. Temper Temper is also more melodic than I anticipated.

The opening track, "Breaking Point" is a great opening track for the album and easily the best track on the record, where the intro is very in-your-face and heavy. The intro was also used in a teaser trailer for the album, and that brought back the high anticipation for the album after hearing the two taster tracks (Title Track and Riot). The title track put some worry into hardcore fans, and BFMV’s current fan base. The track features only two riffs throughout the entire song, the lyrics look very radio-friendly and it definitely felt like it was a rushed writing process. The band however stated that the record company chose the title track as the first song to be released. I took their word for it, because ever since Fever came out, they had a more radio-friendly sound. The band didn't look too happy about the decision, so I can't blame them. They stated that their intention was to have the song be just another song on the album, and not a single. However, the second riff in the song seems decent.

Track 6 entitled, "Leech" contains some balls and heaviness to it, and has a very punk rock influence. The lyrical content talks about who can't seem to detach themselves from you, and they think they have the right to be a part of your group of friends or family.

"Dead To The World" is their 7th track, as well as a ballad, which I believe threw everyone for a loop because that sounds like a heavy title. It turned out to be a great ballad because of the great catchy vocal harmonies, the intensity and speed kicking in throughout the middle section, and leading into a ripping guitar solo by Michael "Padge" Paget. The song was also a collaborative effort with Chris Jericho. Bullet and Chris have been friends ever since the 2011 Uproar Tour which Bullet and Fozzy were featured on. During the writing process, Matt was struggling with lyrical topics, and gave Chris a call to help with the lyrics.

The album’s second taster track is their 8th one, the single "Riot", which was 50/50 for me. While the song has a good groove, it still lacks the creative spirit and writing juices from their previous albums. The solo however sounds very Slayer influenced, while it shreds and has whammy bar action going.

Track 9 entitled, "Saints & Sinners" is another saviour on the track, where it has a great heavy groove, but the track's intro sounds the same as the song, "Room 409" from their previous album, The Poison. When the second riff comes in, it's got a really good groove. The album also sees a written sequel to the classic Bullet anthem, "Tears Don't Fall" from their debut The Poison, simply called, "Tears Don't Fall (Part 2)". I'm not that big of a fan of both versions, but the vocal performance on Part 2 is only slightly better, containing a more complex solo than the original.

There are however two bonus tracks that appeared on the deluxe edition, containing, "Not Invincible" and "Playing With Fire". Everyone who had the chance to hear the two tracks will be greatly disappointed that they did not make the album because they contain exactly what hardcore Bullet fans want to hear musically and lyrically. "Not Invincible" has a very old-school thrash feel, and definitely feels like a track that was written for Bullet's Scream Aim Fire album, featuring some of Bullet's heaviest riffing ever. The second track Playing With Fire is more of a groovy head banging melody. Even though they are just bonus tracks, they truly saved this album from being a complete failure.

I will always be a Bullet fan and will always support them. They pump out great music, but being a lyricist as well, I expect improvement in the lyrics in the way they were written and choices of themes and concepts. To sum up this album compared to Fever, I thought Fever was an awful downturn for all dedicated Bullet fans, even though only 5 out of the 11 songs on Fever are great. Fever had it's fair share of lyrical themes about relationships and some sexual content, and even though the band have somewhat abandoned the relationship lyrical themes, the themes are still in the vein of "whiny teenager nonsense”.

I've always said that Bullet's masterpiece was their second album Scream Aim Fire, because of the heavier and thrashier songs and more aggressive lyrical themes that you would expect from a metal band. I was dreading this album when I initially heard the title track and Riot. After hearing Breaking Point and the final result, it took another downturn.

Highs: Breaking Point, Leech, Dead To The World, Not Invincible and Playing With Fire
Lows: The title track, some recycled riffs, and a majority of the lyrical themes.