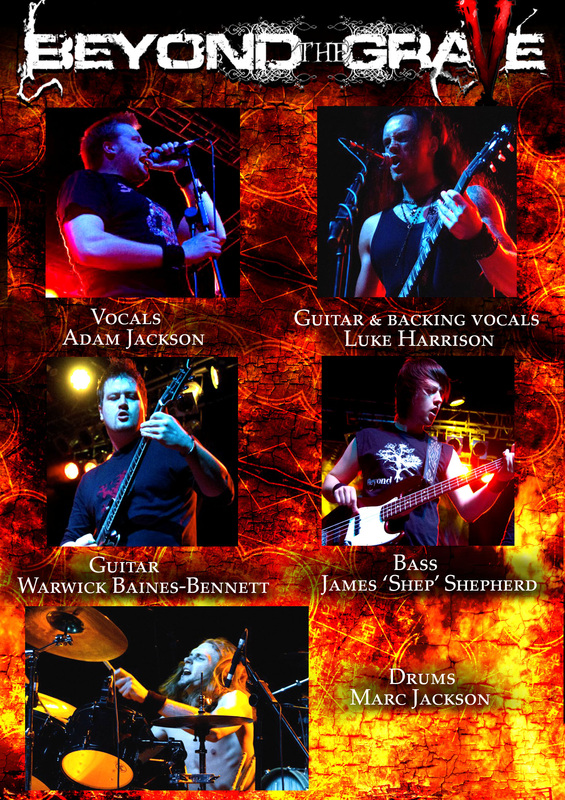 BEYOND THE GRAVE IS:

Ever since I met drummer Marc Jackson when he and his former band M:Pire Of Evil (also featuring ex-Venom members Jeff "Mantas" Dunn and Tony "Demolition Man" Dolan) came to Toronto to play a show as a support act for Onslaught, he and I have kept in touch through Facebook. Recently, he has been promoting the releases of one of his previous thrash projects called Beyond The Grave, and has sent me the tracks on their full-length album The Human Tide (2009) for a review. After listening to it once, I totally understand why the album has received so many raving reviews. It was love at first listen for me, because it contains the aggression and intensity we all love about thrash, and also contains infectious melodies, as well as simplicity and intricacy.

The album opens strong with the two opening tracks "Down Amongst The Dead" and "By The Light Of A Setting Sun" with pummeling riffs and bursts of melodicism musically and vocally, they almost feel like Trivium songs from Ascendancy. The album then heads into more melodic territory on tracks like "The Human Tide" and "In Memoriam" with the slower tempos and superb melodic guitar work and vocals. The first 3 1/2 minutes of melodic brilliance on "In Memoriam" with piano, acoustic guitars, soft electric chords, violins and soft harmonized vocals give a different texture and has a Smashing Pumpkins vibe. The thrash is on great display in the later tracks such as "Dead By September" and "Before My Eyes" containing old-school influences such as Metallica, Anthrax and Exodus. "Interlude" may only be a minute and 40 second instrumental, but its sure to raise eyebrows with its Middle Eastern influence, and its hard not to picture belly dancers dancing to the music.  The last two tracks "Before My Eyes" and "No Time To Bleed" contain more modern influences, as you can hear little hints of Trivium and Avenged Sevenfold in the songs.

At the moment, Marc has mentioned to me that he is working on a new project, but I have seen some pics of The Human Tide popping up on Facebook, and I think that at some point, there might be a reformation of Beyond The Grave, but you never know. I want to thank Marc for making me aware of Beyond The Grave and sending me the album for a review, and I along with many others, hope that the band will rise from the ashes once again at some point in the future and either play some shows or make some new music.