Between The Buried And Me: The Parallax II: Future Sequence
October 8, 2012
Written by Richard Jaspering 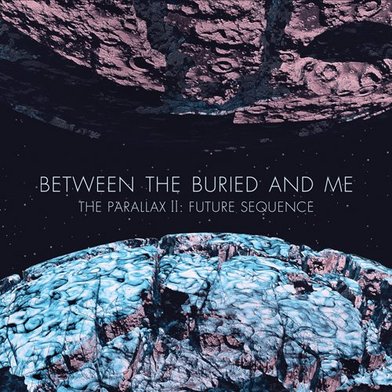 This is the follow-up to 2011's "The Parallax: Hypersleep Dialogues" by Between The Buried And Me.
If the first Parallax release was a short story, then "Future Genesis" is a long, striving volume. The principal characters are separated by their eloquences
and experiences but are attracted by circumstance and seem to press forward through their trials, together, in to entropy and, eventually, nothing at all.
Musically speaking, the paces one is put through in listening to this album intensively are exhaustive, at least initially, as Between The Buried And Me hardly ever
linger in any one category or style for very long. The album commands your attention through its wild mood swings, fantastic pop sensibility and meticulous, metallic
structure, much like its predecessors, but the difference here is that this may be one of the most intelligently composed concept pieces to ever emerge from metalcore,
modern-day.

The album begins with a short and mellow acoustic ballad called "Goodbye To Everything". Lyrically, it presents the theme of unity between individuals in the face of a cosmic vastness, briefly examines essential existential questions and presents exhortations towards nihilism.

Following this introduction, we're given the first of many acts in an astonishing tragedy of carnage, obfuscation and deliverance.
"Astral Body" is an exercise in self-examination, both physically through bodily dissection and through analysis of past wrongs, which presents the prospect of redemption to the subject through grueling catharsis and melodic awakening.

This theme is furthered into the next piece, "Lay Your Ghosts To Rest", which is multifaceted, musically speaking (they segue from dramatic, black prog-pop to technically advanced hardcore in thick, overlapping layers.), and the introspection and self-confrontation continues in an extraordinary battle between the desperate and the driven. "Extremophile Elite" posits the perception of the tortured soul and its emergence into wasteland, surrounded by hostile machinery, met with a buried man and set on a twisting, winding course through reality and dreamscape.

"Parallax" is a quietly impressive interlude, providing a brief intermission to the action with a monologue from the ultra-sentient, accompanied by astral atmospherics which create the next acts, starting the seventh song entitled "The Black Box". With the assurance that "you're in danger from our creations", the menace of the malicious omnipresent is made manifest through an ironic use of pop-metal and the musically grandiose. However, we are returned to the diverse, progressive hardcore style that Between The Buried And Me are known for in "Telos", and the music unwinds with transitions reminiscent of King Crimson whilst combined with dramatic and mathematical shifts, punctuated by the excellent screamed vocalization and intricate, heavy breakdowns.

"Bloom", an invitation to self-awareness through the sea's embrace, melts into "Melting City", displaying one musical metamorphosis after another through the course of a combined thirteen minutes and thirty seconds. The album, at this point, may seem divided between demonstrations of NIrvana and negativity, but is actually enhanced by the blending of the two along with many different aspects of both the psychic life and pragmatic activities of domesticity: the protagonists are divided by a gulf of emotional emptiness, united by a thread of fate. It is at "Silent Flight Parliament" that we reach the climax of the tale, in a fifteen minute progressive rocker that captivates your focus and is the most honest expression of the band's songwriting on the album. There is none of the cheekily ironic, madcap or even slapstick that is found in small doses throughout the album, be it in incidental sounds or entire soundscapes; this song is the realization of the Parallax concept.
The album closes much as it opened, with a reprise to "Goodbye To Everything", a sweet sounding outro that is a sublime summary for the hyperactive shape-shifting, hellish scrutiny and paroxysms of animosity that help define the second part to this concept suite.

The story of The Parallax is a great one, owing somewhat to the Nietzschean sentiment that when you look in to the abyss, the abyss looks in to you.
There are no simple questions posited here, nor are there any easy answers. The concept is ambiguous, on the whole, despite its careful construction, but one is nevertheless drawn to it, repeatedly, to attempt to decipher the riddles and move on to another chapter. Continuously shifting and flowing, fusing excellent pop melodies with an intensively aggressive and uniquely technical style, this is as ambitious and as methodological a work as we have yet heard from Between The Buried And Me.