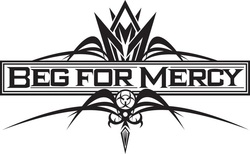 Album: (Self Titled) Beg For Mercy

It seems like young talents are the new thing in the metal scene. With the young Zyon Cavalera drumming for Soulfly and teen JR Bareis shredding for Korn guitarist Brian “Head” Welch’s side project Love And Death, it seems like young metalers are the new “it” factor. Having said this, I shouldn't be surprised that Beg For Mercy, a Toronto based Metalcore band that has opened for The Misfits and recorded an album at the famed Metal Works Studio, was founded by a group of fifteen year olds. Fifteen! Upon reading their bio, I probably did an epic second take when I read “Mack [Smith] founded Beg For Mercy when he was 15 years old,” because their sound doesn't sound anything like a garage band formed by 15 year olds. Though age shouldn't be an important factor in a band, in some cases it is.

Beg For Mercy stay true to their genre and incorporate a lot of hardcore elements into their songs without losing that metal edge. But much to my enjoyment, not every song has a predictable breakdown. Songs like “All That’s Left Is Dust” has a nice combination of clean vocals and screams that stand out. “You Took Everything From Me” has a punky intro that quickly changes to a Metalcore riff. We even get a duet in “Dying Hours,” where vocalist Natalie Smith joins her voice to Mack’s and we are treated with a clean ballad style solo on guitars. You can tell that bands like As I Lay Dying have influenced Beg For Mercy in all the good ways.

Now to take some of the good with the bad. Vocalist Mack is relentless in his screams and seems to work his voice like a pro. You can tell that the musicians in this group are professionally trained and did not recently pick up their instruments for the first time. The scales and riffs are clean and well thought out to fit into the structure of the songs. The rhythms and riffs get you moving to the beat of the track but become a bit repetitious after a few bars. In some songs, like “Six Minutes” we get a change in the riff about halfway through the song, but that change is repeated for a couple of bars becoming tedious again. “Dying Hours” was the only track I really felt that the guitars strayed from the set rhythm towards the end. Though Metalcore is a genre which relies on the repeated beats and riffs for that heavy headbangable element, even bands like As I Lay Dying and It Dies Today squeeze in some scales and variations or changes in drum beats to keep it interesting. Some progressive arrangements in the guitars and bass would make the riffs not so repetitious and would be an additional wow factor to their already solid melodies.

Being a bass snob, I like how in at times the bass is given a chance to really stand out. I just wish it wouldn’t simply be following what the guitars and drums are doing. The drums are strong but I would love to hear a sicker double kick to feel that intense metalcore energy these songs should be giving off. There are a lot of "but's" here, but all in all, Beg For Mercy have some tight songs for their first album. This group of musicians aren’t fifteen anymore and the experience they are quickly gaining makes me excited for what they have in store for us in the near future.