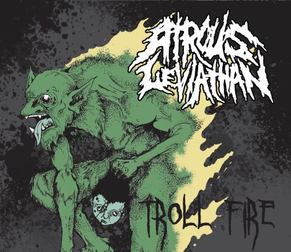 Atrous Leviathan is an amazing death metal band straight out of Victoria, BC. Over the short span of time that they’ve been around, they have really grown and developed their own trademark sound in the metal community.

Their newest demo, “Trollfire” was released during February 2nd of this year. Although there are only four songs, you crave more once you get a good feel and listen for what Atrous Leviathan has to offer.

For starters, their artwork is of a more intense atmosphere, with a green troll holding a decapitated head just beneath the band’s logo. Regardless of how simplistic it may seem, the design doesn’t distract or take away from the theme and sound that’s displayed. Kudos to Tom Lewis at Eat Brains Get Smrt for creating the demo’s cover piece.

“Burn the Cannibal” starts off with Brent’s heavy, roaring vocals which are similar to that of Johan Hegg’s, alongside Stu’s clear and precise drumming. You already know after the first song that this is a band you could really get into.

With the songs, “Brazen Bull” and “Head Smashed in Buffalo Jump”, you can almost sense a build up with each band member becoming more harmonious with one another for the final finish.

Overall, each song connects with one another and portrays what Atrous Leviathan can come up with and how much more you can expect in the future. The final track, “Morning After Massacre”, stays with you even hours after you’ve listened to it.

*Originally I was supposed to go see Atrous Leviathan’s live show at the Cambie a few weeks ago, April 12, but with the misfortune of a last minute phone call from my work, I ended up visiting for a few minutes, catching up with the band and grabbing a t-shirt and their newest demo. Instead, there are photos of the show.