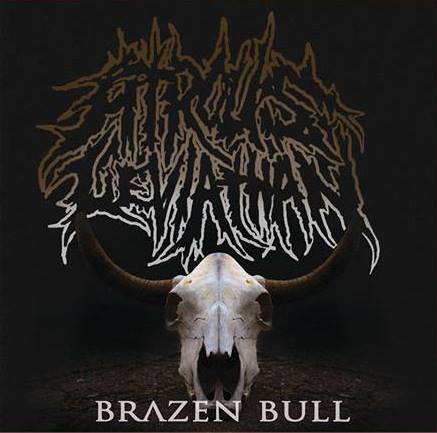 The last time I wrote about this five piece death metal band from Victoria, BC, the band had only released one demo - Trollfire.  This time around, I am proud to be the first interviewer to introduce their newest album, Brazen Bull, which is slated to be released this March.

The artwork, released during the time I was writing this review, contains a bull`s skull with their logo rising above it.  It has a resemblance to Mist`s demo cover, and goes in a very different direction from the artwork used for their Trollfire demo.  I love the simplicity and intensity combined in the cover (and also, I have a serious soft spot for anything involving bones and animal things).

As the first track, "Burn the Cannibal" plays, you just feel a rush and surge of adrenaline in your veins - Brent's vocals get you pumped and ready to break everything around you.

The second track is the title track, "Brazen Bull". As expected, it’s heavy and it’s loaded. The first two tracks are from their demo. In fact, their entire demo is featured on this album, but I found that Atrous Leviathan has gone a step higher from what their fan base was hearing in their previous works.

Having heard both songs as a refresher from where Atrous Leviathan left off, plugging into “Rotting Plague” was like a kick in the face; I wasn’t sure where to begin. The song starts off raw, as it builds up and becomes extremely heavy.  With the combination of Stu’s drumming and Geoff’s bass, it’s hard to miss how much they’ve expanded as a band.

“Another One To Bury” is the final song on Brazen Bull. It’s finished off with a mysterious kind of vibe, although you can only guess what the song is about.

There’s a total of eight tracks, and it’s well worth the listen and buy. Overall, it may not be my style, but it definitely relieves stress, and is nothing short of absolute death metal in its purest form with a twist.