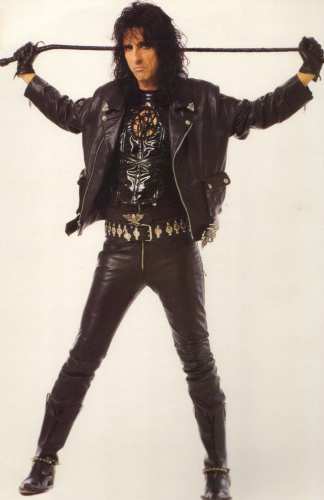 After just being blown away by Alice playing in Kingston Ontario, CANADA on December 5th, 2011, logic would dictate that it would be a while until I saw The Legend, Alice Cooper,  take the stage again.  Luckily for me logic did not figure into this equation on any level. The Coop is full of surprises and his Special Guest Appearance at the Annual Harley Davidson Show held at Le Bell Centre in Montreal, Quebec Canada this past Saturday night (Jan 28th) was certainly no exception.  After finishing off his "No More Mr. Nice Guy" tour he took a well deserved vacation in Hawaii, (after all Alice has been touring for over 30 years and had only missed ONE show due to food poisoning... an impressive statistic for sure),  followed by a Fender Guitar sponsored signing after returning to the USA.  Next on the "Alice agenda"... off to see another show  playing within a 3 hour commute by car from where I live!!!!  This was  a good enough reason for me to get the plastic out... snag a couple of tickets online... throw on my favourite ripped jeans and black Alice "tee", and in the immortal words of The Coop; "just put on my makeup and get me to the show".
With nothing but Cooper Classics playing on my CD player, a friend and  I made our way directly to the venue shortly after lunch. After seeing some truly beautiful bikes on display with some equally beautiful and scantily clad women, I found myself more and more excited in seeing what Alice had in store for his fans.  After all, this was not an Alice Cooper Concert... instead what I experienced was a 60 minute rush of pure Alice adrenaline.  When the venue lights went out and the opening chords of the "Black Widow" reached my ears, and Alice emerged from the back of the stage with his Boa Constrictor wrapped around his neck and his trademark sneer on his face, it was all too obvious it made no difference to Alice or his band where they were playing... Le Bell Centre BELONGED to them as did every single individual in attendance.
Metal Master Kingdom's Album/Song review & Photo Request submission form here. ​​