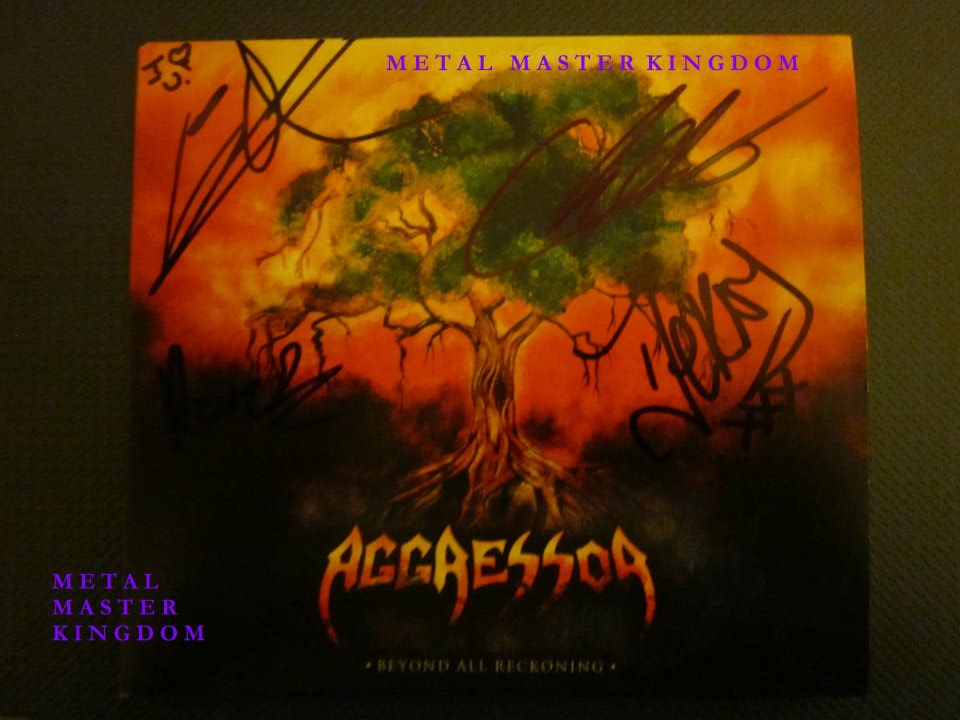 
Rogue Red: We’re here at Sneaky Dee’s with Brian, Harut and Daniel from Aggressor, for the release of their third full-length album, “Beyond All Reckoning”.
And coincidentally since we are in a bar, You guys have a really great promotional video that says you are: “armed with decent gear & a love of beer.” So what is Aggressor’s beer of choice?
Brian: Any one that’s free!
Daniel: I like free too. Free AND cold.
Harut: I’ll take warm.

RR: You’re not going to give any brand a little bit of a boost?
Daniel: No way, we don’t feed the corporate machine!
Brian: (Laughing) Coors Light man, Coors Light!

RR: What is your favourite song on “Beyond All Reckoning”? What are you guys looking forward to playing tonight?
Brian: Uh, we haven’t written our favourite song yet.
Harut: (Laughing) Good answer.
RR: Obviously favourite up until now!
Brian: But I mean, on the album, I’d have to say “Redemption.” It’s the last track on the album and I think, actually (Daniel) Dekay said to me the other day, it really kind of sums everything up together.
It ‘s got an element of every other song. I don’t know if it was unconscious or not, but we all wrote a part of it.
RR: That’s awesome.
Brian: Yeah. It’s the only song where all four of us wrote something.
RR: Amazing! So is that going to be the encore tonight?
Brian: No, no.
Daniel: You may hear it, you may not.
RR: “Might not”? You just said it was your favourite song and you’re NOT going to play it?!
Daniel: No, no you’ll hear it. It’s definitely a band favourite. As Brian said you can hear the whole album in it and it just closes the new album out on a really sweet note. I think everyone will agree with me here.

RR: You guys also experienced a line-up change since the last album.
Harut, how did you get involved and get the Lead Guitar gig?
Harut: Um well, it’s really a long story …
RR: Just the short version!
Harut: No. Well I’ve been friends with Brian for awhile before that and we jammed on occasion. So I guess I was lined up as the guy
Daniel: From the inside point of view it was an obvious choice. He was the guy. He was the guy. And it fit, so it was perfect.

RR: If you guys could perform with any artist (living, dead or disbanded)
who would it be?
Daniel & Brian: Lynyrd fucking Skynyrd!
RR: Excellent.
Brian: But the problem is, it’s the dead version we’d want.
RR: Well I said it could be living dead or disbanded. Powers that be will bring them back!
Brian: (High fives Red) Oh yeah. Yes Ma’am! The REAL Skynyrd.
RR: That’s right. We don’t want the new “tribute” version.
Brian: Yeah no. (Gives the thumbs down)

RR: Everyone lately, especially with the introduction of Metal Evolution and the metal genealogy chart, wants to put a label, category or sub-genre on bands these days.
If you guys could make up your OWN, to tell story of Aggressor what would it be? Your OWN label, your own name. It could be anything. Forget about all the pre-existing ones.
Daniel: Primus.
Brian: Shit cock faggot fuck.
Daniel: (Laughs)
Brian: I think that’d be ours.
RR: I want to see THAT on a chart somewhere ….
Daniel: Yeah at HMV when you go to get the CD it will be in the “Shit Cock Faggot Fuck”? Is that it? Shit Cock Faggot Fuck section.
Brian: (Laughing) Can we say “faggot”?
RR: You can say whatever you want. And you just did!
Brian: (Laughs)
RR: I don’t think it’s going to stop you at this point!

RR: What does 2012 look like for you guys? What would you guys really want to see happen this year?
Brian: I think drink a lot.
RR: Ok so that was last year and the year before.
Daniel: And the year before that ….
RR: But how about THIS year, 2012?
Brian: We have some short-term goals such as getting across the Atlantic and playing. There’s hopes of playing South America so we’re hoping that happens. Getting signed to a label would be really cool.
Daniel: That’s be cool too eh?
Brian: That’s a big one.
Daniel: That’s somewhere on the list.
RR: That maybe should have gone before “drinking beer” just saying. Maybe want to prioritize that list. Maybe that’s why it hasn’t happened yet? Just putting it out there!
Brian: Laughs.

RR: And finally, for all of the Aggressor concert virgins, like myself, can you describe your live show in one word? What am I in for?
Daniel: We’re going to bust the fuck out of that virgin Aggressor cherry!
Brian: That’s more than one word.
RR: That WAS more than one word!
Brian: Um De-virgin… No. Blood!
Harut: De-virginating!
Daniel: (Laughing) Blood!
Brian: Hymen-popping
Daniel: You’re fucked essentially!
RR: (Laughing) Amazing. Looking forward to it! Thank you guys so much.
Brian: Thank you!
Daniel: Thanks for having us. Enjoy the show!
RR: I will!
Metal Master Kingdom's Album/Song review & Photo Request submission form here. ​​