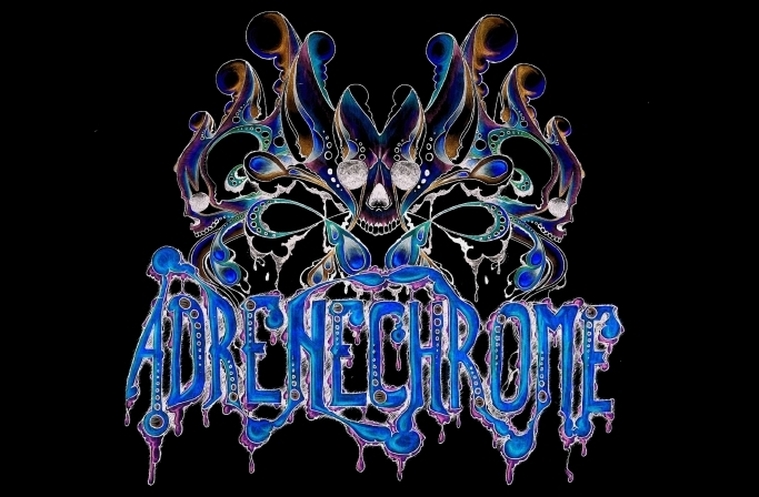 Adrenechrome are a certainly interesting group of musicians hailing from Orillia, Ontario Canada. Formed in the spring of 2010, they remain a powerful unsigned force that has captivated crowds, stretching from Toronto, to Ottawa and Montreal, since their formation.

Their brand of Metal is certainly something within the borders of the traditional rumbling powerful sound that Black Sabbath gave birth to over four decades ago, albeit with touches of the more progressive new school sound of the likes of Mastodon and High on Fire. They also incorporate riffs that rival those of the classic Thrash movement of the 1980’s. It is a fine blend of different Metal movements. Guitar solo work is technical but remains rather melodic, with small hints of neo-classical influence here and there. Their rhythm guitars are tight and firm while retaining a groove worthy of Pantera, and their bass sound is thick, rumbling and powerful, standing out for the keen careful listener at key rhythm points.

A couple of songs worthy of mention are “Hobbled”, “Locust Wings” and “Titans Fall”. The “Hobbled” begins with an amazing tribal drum beat that make one reminisce ever so slightly of Mastodon’s “Blood Mountain” album and Sepultura’s flirtation with tribal music in their “Roots” album. The rest of the track is very Eastern-sounding, with melodic minor riffs, but with a groove akin to that of Pantera. “Locust Wings”, while catchy and original on its own, tends to sound a bit too similar to Mastodon if seen in the context of other bands. It remains a strong piece however, with very well-thought out structure. “Titans Fall” is a memorable 3 minute piece with an in-your-face kind of intro, seamlessly transitioning into a traditional galloping verse. The true star of this piece is the guitar solo work appearing mid-way through the piece, incorporating a melodic almost neo-classical sounding section and chops worthy of Megadeth’s golden years.

These guys are a solid group, with plenty of talent, and hopefully as they continue to evolve mature musically, we will hear more and more of their material. What they have now is certainly admirable and well-made, but I’m sure it is not the peak of their potential; the talent here is such that I’m sure within a few years we’ll hear a masterpiece of an album by Adrenechrome to rival classics such as Cowboys from Hell, Master of Puppets and Rust in Peace. Speaking of albums, their debut “Hideous Appetites” was recently released independently. Go check it out!